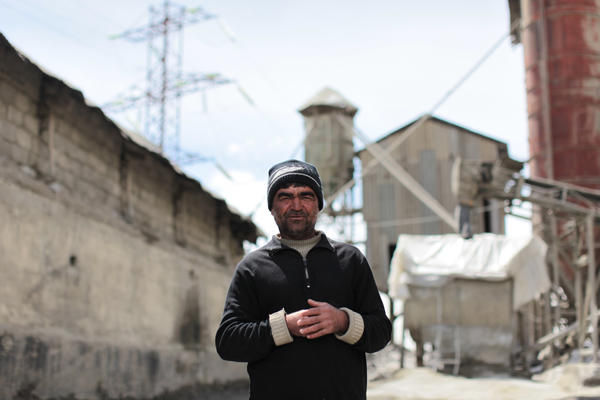 A lone security guard at a closed Tajikistan cement factory. Some 70 percent of Tajiks say they pine for the Soviet Union era.
Iason Athanasiadis

Polls reveal that up to 70 percent of the Tajikistan population longs for the Soviet Union era. Industrial output is a fraction of 1990 levels, and some 2 million Tajiks have emigrated to Russia in search of work.

The guard was the only person around in the empty cement works facility that sprawls along one of the Turkistan Range’s high ridges.

“It used to be so busy here,” he said, popping cheerfully out of a grimy metal tower to offer green tea and stale biscuits. “But the factory closed when the USSR collapsed.” The facility is one of dozens spread across this mountainous landlocked country, which were idled after Tajikistan’s independence in 1991. The country was a Soviet-era industrial powerhouse, a past attested by the abandoned hulks of cement factories littering its verdant countryside.

Today, industrial output is down 70 percent compared with 1990, and cotton production reduced from a million tons annually to just 250,000. An estimated 2 million Tajiks have emigrated to Russia in search of menial jobs.

“People were happy during shoravi [the Soviet era]. The government looked after them, and everyone had work and enough food,” says Karim Ismailov, a trained engineer now reduced to driving a taxi around the capital, Dushanbe.

Every morning, at the entrance to the city’s international airport, hundreds of laborers push and shove to get onto one of the Russia-bound flights. The economic crisis that silenced its once-booming construction sector has affected the estimated $2 billion in foreign remittances that help keep the Tajik economy afloat. The salaries of government employees are so low that corruption is endemic. Young people declare themselves disillusioned.

“The new generation of 20-somethings cannot understand just how that state was,” says Muzaffar Olimov, the director of the Sharq Research Center, whose polls reveal that up to 70 percent of Tajiks pine for the Soviet era. “It offered insurance, financial guarantees for old age – now, none of these things exist.”

Like Loading...
‹ Editorial: Malala Yousafzai and the White Saviour Complex
Stress of Childhood Poverty May Have Long-Term Effect on Brain ›