Salvation Army says “Gays Need to Be Put to Death” 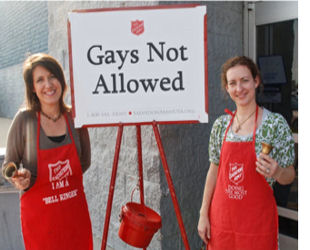 Christmas, it is the time of the year for holiday shopping, and also hearing the bell ringers for the Salvation Army collection donations. Those donations provide Christmas dinners, clothing, and Christmas toys for children in need. The charity collects millions of dollars in donations every year, and they distribute it to needy families, seniors, and the homeless in keeping with the spirit of the holiday season.

The Salvation Army has expressed their Christian beliefs in the past, stating that they do not accept the LGBTQ lifestyle, nor do they stand up for gay marriage. Salvation Army went on record recently, stating that LGBTQ parents should be put to death as the bible instructs. Major Andrew Craibe, a Salvation Army Media Relations Director, went on public radio hosted by journalist Serena Ryan, to discuss a recent call by LGBTQ parents for a boycott of the nonprofit for its anti-gay policies and beliefs.

Ryan questioned Craibe about Salvation Story: Salvationist Handbook of Doctrine, the manual used to train Salvation Army “soldiers” and members. Several chapters refer to the sin of homosexuality, including a section that cites Romans 1:18-32, which includes a admonition that homosexuals “deserved to die”;

“ Ryan: According to the Salvation Army gay parents deserve death. How do you respond to that, as part of your doctrine?”

“Craibe: Well, that’s a part of our belief system.”

Ryan: So they should die.”

“Craibe: You know, we have an alignment to the Scriptures, but that’s our belief.”

“Ryan: You’re proposing in your doctrine that because these parents are gay, that they must die.”

“Craibe: Well, well, because that is part of our Christian doctrine “

“Ryan: But how is that Christian? Shouldn’t it be about love?”

“Craibe: Well, the love that we would show is about that: consideration for all human beings to come to know salvation…”

“The Salvation Army encompasses a diverse community with a wide range of opinions on human sexuality and other subjects. The senior leadership of The Salvation Army continues to reflect on Christian and Biblical tradition, and especially on the themes of  justice and mercy, to further deepen the understandings of our own members and build a more healthy relationship with the LGBTQ community. We pledge to continue to offer services to all and to treat each person with dignity, respect and non-discrimination.” 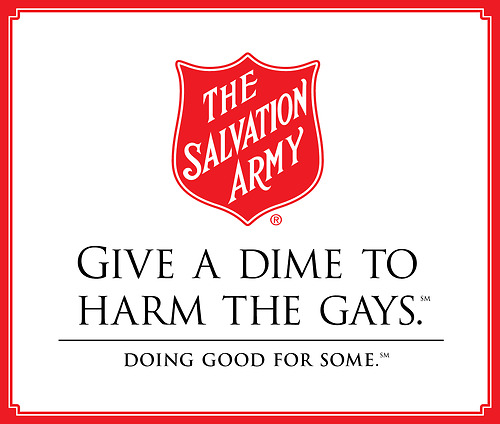 The salvation is willing to take the money from the LGBTQ community, but they aren’t willing to support them. I remember reading a story a year or two ago about the salvation army not supporting the LGBTQ community, so I stopped supporting them. That red bucket they put out every year for Christmas, depends on people like us, to put money in it. They are a charity that depends on donations to help the families in need.

I think it is horrible that a charity admits they think LGBTQ parents should die. It does not matter who you are or what you believe in. No one deserves death. For a charity to wish death upon the LGBTQ community is distasteful, alarming and hurtful. I think the LGBTQ community needs to take a stand against the Salvation Army. If you do not support us, then we do not support you.

Note to see our follow up story please go here: