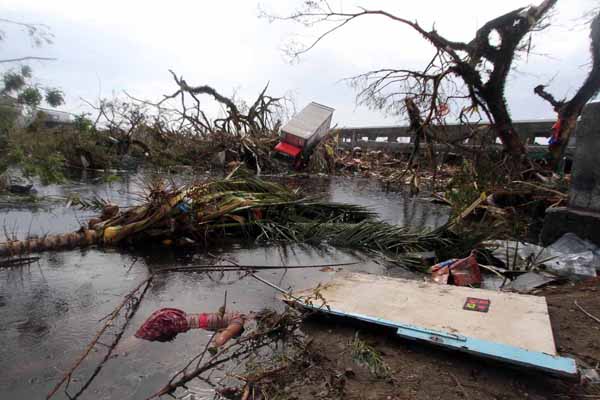 Statement by Communist Party of the Philippines

Fight Back News Service is circulating the following Nov. 11 statement from the Communist Party of the Philippines (CPP).

Carry out all-out mobilization for relief support to disaster victims

The Communist Party of the Philippines (CPP) calls on the entire Filipino people, including those overseas, to mobilize and generate the maximum possible emergency funds and supplies for the victims of the recent super typhoon Yoland (international name Haiyan).

An estimated nine million people, or 10% of the entire Filipino population, suffered the wrath of the storm considered to be the strongest in recorded history, which barreled through 36 provinces. Majority of the victims of the storm are small peasants, farm workers, fisherfolk, mountain people, workers and other poor people who are the most vulnerable to the storm.

Wide swathes of land were engulfed by the surging seas resulting in massive destruction of public infrastructure, homes, property and agricultural land. It is feared that the number of deaths may run up to several thousand people.

The revolutionary forces under the CPP commiserate with the entire Filipino people, especially those who lost friends and family members and who are suffering from the grave impact.

The CPP calls on all progressive and democratic forces to immediately organize the collection of funds and supplies for relief and rehabilitation work and ensure their immediate transport of these to the affected areas. Main attention is justifiably centered on extending assistance to Tacloban and the Eastern Visayas provinces. There should also be sufficient attention given to other areas in Central Visayas, Panay, Negros, Masbate, Mindoro and Palawan as well as in Bicol, Southern Tagalog and Eastern and Northern Mindanao.

THe national mobilization of resources is necessary to sufficiently extend assistance to all areas devastated by the storm. There must be appropriate national coordination and cooperation in order to appropriately distribute help and supplies. Priority should be given to those requiring immediate medical attention, the children and the elderly.

The commands of the New People’s Army (NPA) units operating in the devastated areas have immediately changed their mode of operation and have carried out search, rescue, relief and rehabilitation efforts.

Within the guerrilla front areas, barrio (village) committees, provisional revolutionary government units, and revolutionary mass organizations have immediately been mobilized to carry out efforts to assist the people and organize rehabilitation efforts to help the people resume production and other aspects of their normal lives.

In line with policy, the concerned NPA commands, including the NPA Mt. Amandewin Command (NPA-Leyte Island), and leading committees of the CPP can issue appropriate ceasefire orders to their respective units, putting NPA units on defensive mode but ever vigilant to enemy offensive operations. These can seek to facilitate the entry of organizations and agencies extending relief and emergency supply and ensure the safety of relief workers. The people should vigorously oppose continued suppression activities being conducted by the Armed Forces of the Philippines under Oplan Bayanihan, especially in areas ravaged by the storm.

The Filipino people are angered over the Aquino regime’s slow and terribly inadequate response to the disaster. They critize Aquino for blaming the people for being unprepared. In the hours immediately after the storm, the Aquino government was practically absent in

Tacloban and other parts of the country. They further criticize Aquino for making use of the disaster to make a pitch for the much-detested President’s Social Fund and Disbursement Acceleration Program when, in fact, it has allotted only a minuscule for calamity response.

On the other hand, the CPP extends the people’s gratitude and commendation to various local and international media agencies which have made use of their resources to provide crucial information service to disaster victims. The Filipino people welcome local and foreign volunteer civilian organizations and agencies whose contributions have been invaluable.

The CPP calls on all international civilian agencies to extend maximum possible support to the victims of the disaster. The CPP denounces the Aquino and US governments for taking advantage of the disaster to again deploy more US warships and armed US soldiers in various areas in violation of Philippine sovereignty. The CPP urges foreign governments who wish to extend aid and direct help to course their assistance through their civilian agencies or organizations.