5 reasons you should stay off the Pope Francis bandwagon

This week GlobalPost showed why so many people are digging on Pope Francis. He loves the sick and the poor. He lives a simple life that reflects his values. He has criticized the Catholic church for its alienating obsession with social issues. And he has called out global capitalism for the greed it has produced and the social devastation it has wrought.

Sounds good? Not so fast.

Here are some reasons we should think twice before hopping on the Pope Francis bandwagon.

1) Unanswered questions about the Dirty War in Argentina 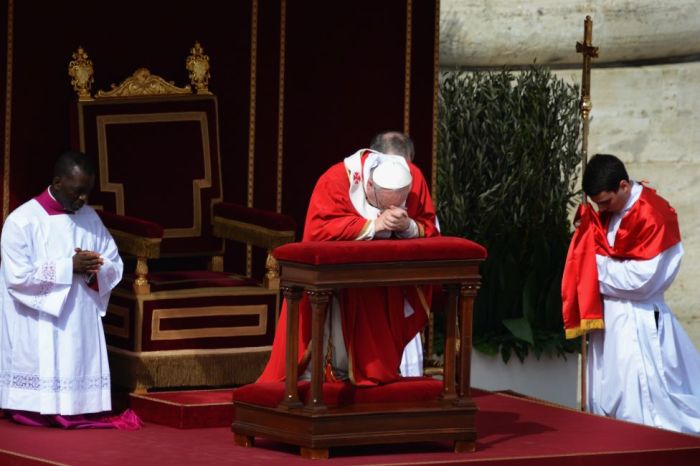 The past is good place to start when questioning the hype surrounding Pope Francis.

Specifically, what was he doing during the Dirty War in Argentina, when the military junta that ruled from 1976 to 1983 was undertaking the systematical mass murder of so-called “subversives,” all under the Western-supported banner of “anti-Communism.” As few as 9,000 and as many as 30,000 men, women, and children were killed or “disappeared” in the course of the purge.

The Catholic Church was complicit in many ways. Archibishop Juan Carlos Aramburu openly supported the military junta and its murderous purge. Some priests gave last rights to men and women as they were headed to execution.

So what was Pope Francis, then known as Jorge Mario Bergoglio, doing during all this?

He was the Provincial Superior of the Society of Jesus from 1973 to 1979, meaning he was the boss of the Jesuits in Argentina. His role in the Dirty War is hazy. According to some reports, he was a willing collaborator: at worst, pointing out liberal ministers to the military and, at least, refusing to protect priests who were seized. He denies all of this, insisting that he secretly helped priests who had been targeted.

So, Pope Francis, a leading Catholic figure at a moment when Argentina needed strong voices of opposition, was, at best, silent, and at worst, complicit.

We might never uncover all the facts about what happened. But there is enough there to at least be a little skeptical of Francis, his past, and his character.

Francis has made some headway on the child sex abuse crisis in the Catholic Church. He’s spoken out on the problem and instituted some new laws governing Vatican officials and employees.

That’s a start, but there is much more to be done when it comes to putting words into actions.

This is especially true in Latin America, where some have questioned Francis’ handling of molestation cases in Argentina, Chile, the Dominican Republic and Peru.

He has been largely silent on four shocking cases.

2. Peru: More secret and non-transparent handling of child sex abuse has taken place in Peru, where an auxiliary bishop went on the lam after child sex allegations against him surfaced. The Vatican’s only action was, again, to secretly dismiss him from his post. The Archbishop of Lima, Juan Luis Cipriani, even criticized journalists covering the story and said that the abuser deserved “mercy.”

3. Chile: When a congressional committee began investigating sexual abuse at Catholic children’s homes, the Archbishop of Santiago refused to appear before the committee. He bravely claimed separation of church and state, despite the fact that Chile’s agency for child welfare partly subsidizes the homes. Quite a show of strength from the Vatican’s top dog in Chile.

4. Argentina: In Francis’ home country, an imprisoned priest, Father Julio Cesar Grassi, is now appealing his 15-year sentence for sexually abusing boys. You’d think a convicted and imprisoned child rapist in the Pope’s home country would offer a low-risk opportunity for the Vatican to take a strong stand against child sex abuse in the church. Not so. One bishop in Argentina has openly claimed that Grassi is innocent, and the archdiocese released a statement pointing out that of 17 charges leveled against Grassi, he had been found not guilty of 15. Great.

So when we applaud Pope Francis for his vocal opposition to poverty, inequality, and global capitalism, we should remember the pernicious things he’s not opposing as vocally.

Francis’ softened tone on gay marriage and abortion is one of the things drawing admiration from socially liberal folks. He said that the Church shouldn’t “interfere spiritually” in the lives of gay men and women. And he warned that the Catholic ministry had become “obsessed” with abortion.

He hasn’t always held such views, it seems.

Just before Argentina legalized same-sex marriage, as recent as 2010, Francis called the bill “a plan to destroy God’s plan” and “a move by the fathers of lies to confused and deceive the children of God.”

And he has urged a fairly obsessive commitment to fighting abortion, telling Catholics in 2005 that they should protect life even if “they persecute you, calumniate you, set traps for you, take you to court or kill you.”

So the less conservative tone is new for Pope Francis. We’ll need to wait and see whether it translates into doctrinal change.

Under the harrowing reign of Pope Benedict, the Vatican cracked down on the Leadership Conference of Women Religious (LCWR), an organization that represents most American nuns. A Doctrinal Assessment by the Vatican’s Congregation for the Doctrine of the Faith (CDF) accused the LCWR and American nuns of promoting “radical feminist themes” by tempering or even opposing the Vatican’s positions on gay rights and abortion.

The CDF determined that a Vatican-appointed overseer should govern the LCWR to keep the nuns in line. Some critics called the measure an “inquisition.”

When Pope Francis took over for Benedict, he had the opportunity to reverse or change the CDF’s controversial decision. Instead he “reaffirmed the findings.”

So maybe Francis was feeling some pressure as a new Pope in the unusual circumstances of evaluating decisions made by a living predecessor. Either way, he had an opportunity to do end a witch-hunt against American nuns and didn’t.

5) He might have performed an exorcism on live TV

In the scheme of things, this one isn’t nearly as important as Francis’s take on Church doctrine or his willingness to combat child sex abuse. But it’s disturbing enough to join this list.

During a Mass in St. Peter’s Square in May, TV cameras filmed Francis praying over a man in a wheelchair. They exchanged words and Francis placed two hands on the man’s forehead for several seconds while then man appeared to convulse slightly and gasp for breath.

Almost immediately, people began to speculate that Francis, who often talks of demons and devils in his sermons, had performed an exorcism.

The Vatican released a statement denying it. Gabriel Amorth, formerly a chief exorcist for the Vatican, saw it differently.

“That was a real exorcism and what is more,” he told reporters, “the boy the pope exorcized came to me today. His name is Angelo and he is possessed by four demons. I performed a long exorcism on him.”

Huh. Not a great sign for people who’d like to see the Catholic Church, one of the most powerful institutions in the world, enter the 21st century as a force of progress.

Maybe it wasn’t an exorcism. Or maybe it was an accidental exorcism that Pope Francis was an unwilling party to. Judge for yourself.

Like Loading...
‹ Elián González: My time in the U.S. “changed me for life”
Rally in Protest at Khalil & Taffy’s Nov. 22 Disciplinary Hearing! ›