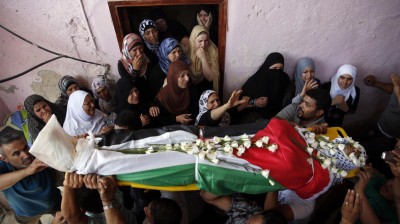 Palestinians carry the body of Jihad Aslan during his funeral at Qalandiya Refugee Camp near the West Bank city of Ramallah Aug. 26, 2013. (Reuters)

Head of Israel’s Abu Kabir forensic institute, Jehuda Hiss, had admitted harvesting organs from dead bodies without the permission of their families.

“We started to harvest corneas … Whatever was done was highly informal. No permission was asked from the family,” Hiss said in an interview with an American academic in 2000. The interview was released in 2010 and part of it was aired by Israel’s Channel 2 TV.

The Israeli army admitted to organ harvesting but said the practice was no longer performed. “This activity ended a decade ago and does not happen any longer,” the military told Channel 2.

In the interview, Hiss described how his doctors would mask the removal of corneas from bodies. “We’d glue the eyelid shut,” he said. “We wouldn’t take corneas from families we knew would open the eyelids,” Associated Press reported.

The Palestinian official said Israel will “soon be returning some of the organs,” Ma’an reported.

"People always have been the foolish victims of deception and self-deception in politics, and they always will be, until they have learned to seek out the interests of some class or other behind all moral, religious, political and social phrases, declarations and promises."
Today, 151 year ago, #lenin was born. Wherever resistance movements struggle against imperialism, wherever communities buckle under the weight of police violence and gentrification, wherever a democrat tells the people to wait for justice, wherever workers and tenants unite, we say: Lenin lived, Lenin lives, Lenin will live.
The American Party of Labor, along with all progressive people in the United States, celebrates the conviction of murderer Derek Chauvin. 
The march continues in Chicago, where protesters, including indigenous activists, are mourning #adamtoledo #chicagoprotests
Thousands of protesters in Chicago’s Logan Square Park are gathering to mourn #adamtoledo and fight for #policereformnow #chicagoprotests
Defund and disarm the police, and put them under community control!