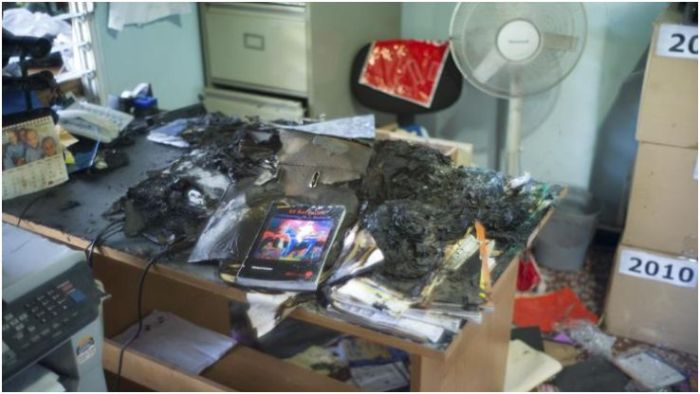 While authorities provided no motive for the attack, Probusqueda said earlier this year that it had documented at least a dozen cases of children stolen by members the military during the 1980-92 war between the Salvadoran government and leftist guerrillas. Some were sold or given away for adoption, or raised by the men who took them, the group said. Efforts to investigate those cases have been hindered by the military’s refusal to turn over DNA records.

The group has also received nearly 1,000 complaints about children separated from their families during the U.S.-backed war. It says it has helped at least 235 people, many adopted in the United States or Europe, locate their birth parents.

“This is clear sabotage of our work,” director Ester Alvarenga said, adding that she had not yet been allowed to check the burned offices. “We don’t know what documents they destroyed or took, but this is an attack against our work.”

One of the office’s guards said the attackers stormed in before dawn by forcing another guard arriving for work to act as decoy and get him to open the door. The first guard, who refused to be quoted by name for fear of reprisal, said he and the other guard were beaten and tied up, then their assailants appeared to open cabinets and throw objects around before setting a fire.

“They told us that if we moved, they would kill us,” he said.

Official human rights prosecutor David Morales suggested the attack could be related to an appeal before the country’s Supreme Court that would eliminate amnesty for people who committed grave war crimes, and he asked the attorney general to make a priority of investigating the attack.

“They have the responsibility to look at the possibility that this was a politically motivated attack intending to intimidate Probusqueda because of their work in defending human rights,” Morales said.

The 1993 amnesty law has protected military commanders from being prosecuted for crimes committed during the civil war, including the murder of six Jesuit priests. But last year the Inter-American Court of Human Rights said the law goes against an international treaty.

The Inter-American Court of Human Rights has found the government was responsible for the abductions of at least six children also documented by Probusqueda. It ordered El Salvador to open government archives and meet other requests for action, such as providing medical and psychological support to victims, naming schools after the abducted, locating those still missing and apologizing publicly.

The nation has fulfilled only the last part of the order, holding a ceremony last year at which a Cabinet member asked for forgiveness from families.

The case recalled the experience in Argentina, where the military kidnapped hundreds of children of political opponents, and the prosecution of those responsible three decades later led to the indictment of top officers, including army Gen. Jorge Rafael Videla, then-head of Argentina’s military junta. Some of the kidnapped children were adopted by military families.

In most of Probusqueda’s cases in El Salvador, children were separated from their families during the confusion of war and were turned over to the Red Cross in the belief their parents were among the 75,000 people killed in the conflict. Such children were placed in shelters and offered for adoption, mostly to families in the U.S. and Europe.

“They are doing the same thing they did in the 1980s,”said Apolonia Guillen, a 72-year-old who said she lost relatives in the war. “They don’t like justice; they don’t want justice.”