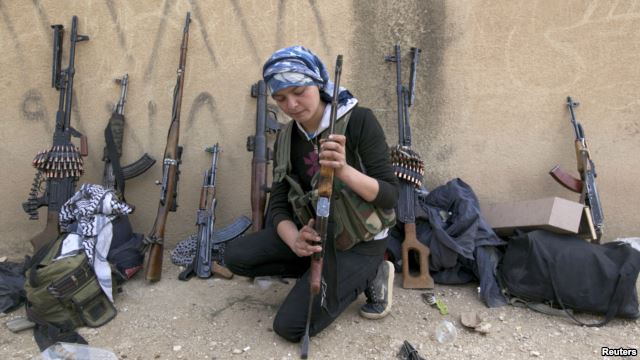 A Kurdish female fighter from Kurdish People’s Protection Units [YPG] checks her weapon near Ras al-Ain, in the province of Hasakah, after capturing it from Islamist rebels, November 6, 2013.

On the outskirts of the Kurdish town of Derik, close to the Iraqi border, a billboard displays the photographs of more than 300 Kurdish warriors who have died in the past few months in northeast Syria battling mainly jihadists. In the top left corner, 13 of the snapshots are of women.

No other ethnic or religious group in Syria’s brutal two-and-half year civil war has fielded so many female fighters, analysts say. Twenty percent of the Kurdish warriors grouped together in the People’s Protection Units, or YPG, are women.

And Kurdish women – in increasing numbers – are joining internal security and police units tasked with maintaining law and order, guarding checkpoints and strategic buildings from jihadists and radical Islamists.

Twenty-seven-year-old Jameila Abbas is a member of a 50-strong internal security unit in Qamishli, the largest town in Syria’s Kurdistan. She said when she enlisted two years ago, many men – and even some women – mocked the idea of women in uniform.

“I expected that people would say bad things about me, but I didn’t care because I like my work. But we managed to change the opinion of the people and they respect us,” said Abbas.

The ages of the women in Abbas’ unit range from 18 to 40. Three are married, and the commander is the mother of two boys and a girl.

She said she joined up to assist in the defense of Syria’s Kurdistan and is ready to fight the Syrian army if it returns after being withdrawn by Syrian President Bashar al-Assad early in the conflict. But she also wanted to alter public thinking about the role of women in Kurdish and Syrian society.

“I love my country and I want to protect my country, but also I want free the woman in my country,” said Abbas..

Nagbeer, a 20-year-old, who joined a six-woman police unit set up by the Qamishli council, the first official female municipal police unit in Syria, said she also wanted to challenge traditional ideas about her gender being weak. Before the conflict she never dreamed of becoming a police officer.

“It was outside our thinking that we could be a police officer. It only come the last year when there was a decision that a woman can be a policeman and we decided to take the challenge and become police but we never thought about that before,” she said.

Female recruits for either frontline YPG groups or internal security units go through a month’s basic training – normally at a camp in the town of Afrin, said 26-year-old Sana Adnan Shamdin.

In shops and offices and cafes across Syria’s Kurdistan, there are now photographs memorializing the Kurdish women who have fallen in battle.