Chinese naval soldiers are pictured manning their stations on China’s first aircraft carrier Liaoning, as it travels towards a military base in Sanya, Hainan province, in this undated picture made available on November 30, 2013. (Reuters / Stringer)

Following Washington’s move to increase its military footprint in Asia, China has declared it is building a nuclear-powered aircraft carrier of a size to compete with the mightiest in the US naval fleet.

“By that time, China will be able to confront the most advanced US carrier-based fighter jets in high sea,”the Chinese-language article reads.

The announcement comes amid heightened tensions in the region, aggravated by Washington’s recent decision to increase its military might in and around the East China Sea.

In September, the US Navy’s first littoral combat ship, USS Freedom, arrived in Singapore to start its eight-month deployment in Southeast Asia.

Meanwhile, Japan this week contributed to regional rhetoric when it announced a robust boost in defense spending over the next five years. Under the plan adopted Tuesday, Japan will purchase new military hardware, including its first surveillance drones, US-made F-35 stealth fighters and Aegis combat systems, a move that triggered a sharp response from China.

Japan is making an effort to ensure the security and prosperity of the international community, but at the same time it is clinging to a Cold War mentality and beefing up its military alliance with relevant countries, he said.

Thus far, tensions in the region have been limited to a harmless display of saber-rattling, but there have been some near misses.

China’s first aircraft carrier, which was renovated from an old aircraft carrier that China bought from Ukraine in 1998, is seen docked at Dalian Port, in Dalian, Liaoning province.(Reuters / Stringer)

Although Beijing and Washington diplomats attempted to play down the incident, one analyst told the Christian Science Monitor that the event carried a warning from the Chinese.

“The Chinese are trying to make it clear that, if the US wants to operate in these waters, then it should be prepared to be operating under a high state of tension,” said Dean Cheng, senior research fellow for Chinese political and security affairs at the Heritage Foundation. “If the US doesn’t want tension, then it’s very simple: leave.”

China’s first domestically built aircraft carrier will be a larger version of Liaoning. The design is reportedly based on drafts of a Soviet-era, nuclear-powered, 80,000 ton vessel capable of carrying 60 aircraft.

China has made some dramatic technological breakthroughs of late.

In January, 2011, China conducted a test flight of a new stealth fighter jet, the J-20, on the same day that former US Defense Secretary Robert M. Gates was in Beijing for talks.

China has also demonstrated remarkable technical ability beyond purely military pursuits. Just this month, China became the third country, behind the United States and the Soviet Union, to put an unmanned spacecraft on the Moon. 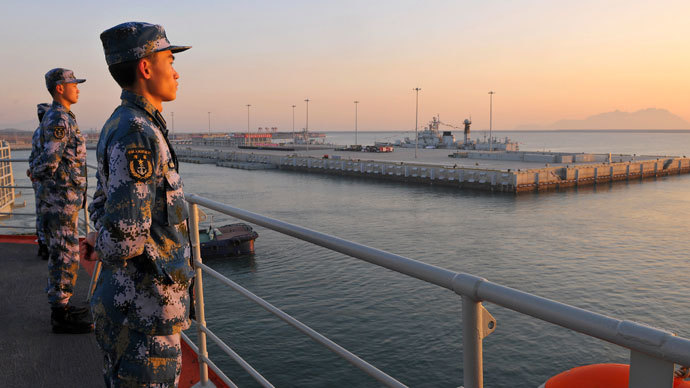 Chinese naval soldiers stand guard on China’s first aircraft carrier Liaoning, as it travels towards a military base in Sanya, Hainan province, in this undated picture made available on November 30, 2013.(Reuters / Stringer)

Like Loading...
‹ 47,000 Migrants Killed during Transit through Mexico in the last Six Years
Wounded Knee Anniversary: A family remembers ›