Home › Imperialism › Economic Exploitation › Venezuela: The Right Conspires While the Government Does Not Solve the People’s Problems

Venezuela: The Right Conspires While the Government Does Not Solve the People’s Problems 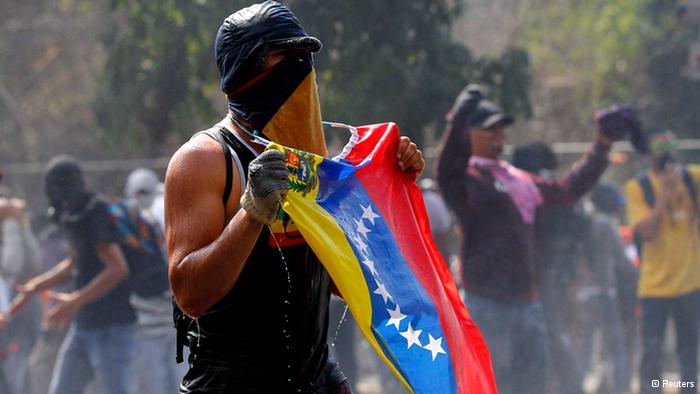 The most reactionary sectors of the Venezuelan right are trying to exploit the discontent among a large sector of the population to prepare a coup and create destabilizing actions, instructed by U.S. imperialism. The Venezuelan government should radicalize its political project by taking measures that would actually strike the power of the bourgeoisie and regain the confidence of the workers, youth and people.

Venezuela is going through difficult days, social unrest is great and the reason for the call for mobilizations that began the proposed Day of Youth are secondary when one makes a critical analysis of the social economic, and political reality, which is becoming more acute as time passes and the government of Nicolas Maduro shows signs of incapacity (political and personal) to address these problems.

The events are known: massive mobilizations called in several various cities both by the opposition and by pro-Chavez forces; violent clashes between demonstrators and opponents with the police; state institutions and agencies are stoned and vehicles torched; three people have died, about seventy have been wounded and more than one hundred and fifty detained.

The government was quick to describe the protests as an attempt by a fascist group to carry out a coup, similar to what occurred in April 2002 in which the whole right acted in a coordinated manner. However, this way of looking at things does not allow one to understand self-critically what is actually taking place and to separate the real discontent among an important sector of the population and the use that the most reactionary sector of the right, linked to the political plans of U.S. imperialism, tries to make of it. Today, the most reactionary sectors are trying to provoke a crisis scenario in which to carry out destabilizing actions. Leopoldo Lopez, of the Popular Will Party (a part of the Bureau of Democratic Unity), is one of the heads of this project.

After decade and a half of “Bolivarian revolution,” the economic power of the business owners and bankers is enormous and the old problems of the Venezuelan economy have not been overcome; some of them have gotten worse. Throughout this period the production apparatus has not developed, to the point that even toilet paper must be imported and there are problems with the supply of basic products such as rice, sugar, cooking oil and meat. Of course, in this scenario the business boycott also has an effect, but it would be an error to blame it solely on this.

Reality shows the political limitations of the “Bolivarian revolution,” which is not striking at the base of the power of the ruling classes nor is it breaking the country’s dependence on oil revenues.

To avert some of the problems, a few days ago Maduro announced the adoption of 18 measures that, in essence, do not get at the core of the structural problems. Eight of these involve mergers of ministries, programs and elimination of agencies, changes, removal or appointment of officials; two are aimed at controlling the circulation of hard currency and its official price on the market; others could affect the commercial distribution (one positive element is the establishment of the maximum commercial rate of profit at 30%); and the rest are nothing but generalities. One Venezuelan analyst (not from the opposition) described them, compared with the oil profits, as equivalent to a “dental filling of a severely decayed tooth.”

Meanwhile the workers are seeing their wages lose purchasing power and that a caste of new rich people has emerged, known as the “boli-bourgeois”. To understand the magnitude of the problem one should note that the last year ended with a record inflation rate of 56.1%. Although one of the recently adopted measures aimed at preventing speculation (control of one of the bands of the price of the dollar), the fact is that it will be an inflationary factor.

While problems such as these persist in Venezuela, the right will be able to manipulate them and conspiring against the government, which we strongly repudiate. For Nicolas Maduro and the pro-Chavez forces in general, there is no other option but to radicalize his administration: to implement a program that in reality affects the power of the economic groups that profit by exploiting the labor of the Venezuelan working class and speculating with capital; to develop the productive apparatus to achieve productive and commercial sovereignty; to rely on the workers of the city and countryside at all times and actions; and to remove the corrupt elements who are taking advantage of a political process created by the people.

Like Loading...
‹ Fascists take deputy prime minister and other posts in Ukraine’s new government
Final Resolution of the 19th Plenary of the ICMLPO ›