Home › International › Hayatin Sesi TV Has Been Blacked Out… Ww Won’t Be Silenced Or Toe The Line!

Hayatin Sesi TV Has Been Blacked Out… Ww Won’t Be Silenced Or Toe The Line! 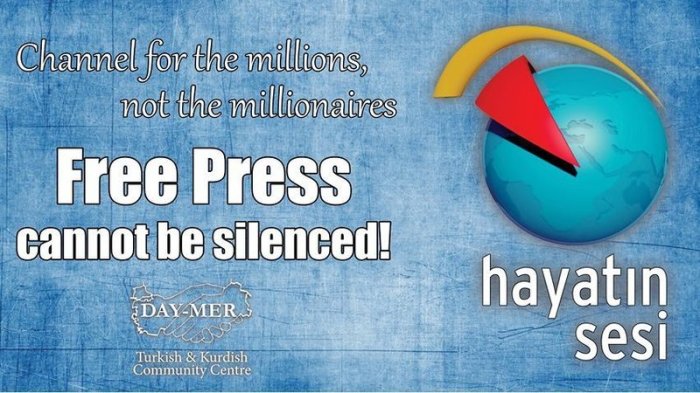 Hayatin Sesi TV was blacked out arbitrarily on Wednesday, September 28 without prior formal notice.

Following our inquiries, TURKSAT the satellite broadcast company stated verbally that the company stopped our broadcast in line with the instructions given by a government decree.

11 other TV channels and radio stations, including TV 10,Van TV, Jiyan TV and Zarok TV, have been blacked out and silenced simultaneously, adding to the long list of blocked/closed media outlets, and blocking all pro-Kurdish ones.

We informed the public earlier as to how  the AKP government was putting pressure on our TV through fines and adminstrative warnings by the Radio and Televsion Supreme Council (RTUK).

We stated how the 4 fines and 4 warnings we received in the last three months were being used to pave the way for a total black out.

Now the government, without even waiting for the usual channel RTUK to act, has blocked us on the basis of the State of Emergency which was declared following the failed coup of July 15, and the power given to the government to issue decrees.

Hayatin Sesi was founded 10 years ago to be the voice of the working people, of secular forces, of peace and of all oppressed and exploited peoples.

With its actions the AKP government reveals its animosity towards this voice, and states explicitly that no media outlet will be allowed unless they toe the line.

We consider this a blow to the freedom of the press and people’s right to the news, and call all democratically minded people to show solidarity with Hayatin Sesi.

This petition will be delivered to: