53 Years of the Marxist-Leninist Communist Party of Ecuador (PCMLE) 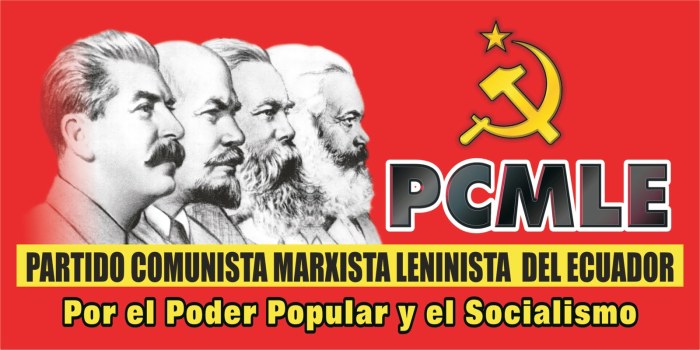 On Friday, July 28th, the Central University of Ecuador in Quito resembled a liberated zone as, festooned with red banners, hammers and sickles, pictures of Marx, Engels, Lenin, and Stalin, the campus hosted a public event celebrating the 53rd Anniversary of the Marxist-Leninist Communist Party of Ecuador (PCMLE).

Founded in 1964, the PCMLE is a major force in international anti-revisionist Marxism-Leninism. The Party is an active participant in the International Conference of Marxist-Leninist Parties and Organizations (ICMLPO). The PCMLE has established powerful roots in the women’s, student’s, trade union, and Indigenous rights movements in Ecuador. Its electoral wing, Unidad Popular (“Popular Unity”) has 500,000 registered members.

The evening’s festivities began with a presentation by Comrade Osvaldo Palacios, the PCMLE’s National Spokesperson, and included musical and theatrical performances, a tribute to fallen heroes and martyrs of the Party, a salute to the 100th anniversary of the Bolshevik Revolution, and a message of solidarity delivered by a representative of the Revolutionary Communist Party of Bolivia, on behalf of the international delegates attending the XXI International Seminar on the Problems of the Revolution in Latin America. The American Party of Labor was represented at the event by its National Chair, Comrade Alfonso Casal, and its National Secretary, Comrade Victor Vaughn.

The evening concluded with militant chants, a singing of The Internationale, and a fireworks display.

The American Party of Labor salutes the PCMLE for its proud history of struggle, not only for the working and oppressed people of Ecuador; but, also for its efforts on behalf of the world Communist movement. The comrades of the PCMLE are an example for us all.