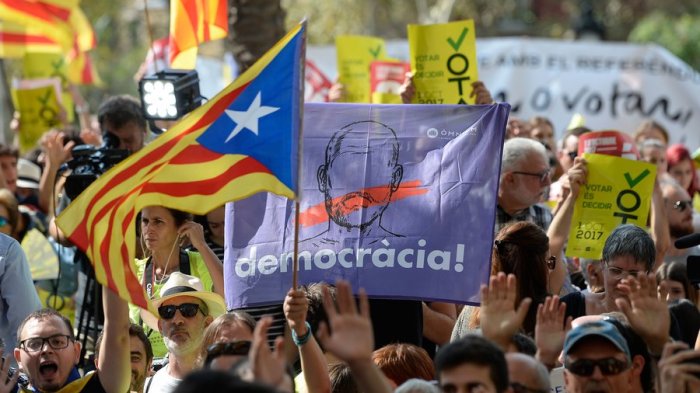 The ongoing developments with respect to the Catalan national question and the violent repression meted out by the Spanish government have rightfully provoked impassioned responses from revolutionary parties and proletarian forces across the globe. Scenes of jackbooted riot cops wading into crowds, kicking and beating down unarmed protesters, recalls the Fascist past of Francoist Spain as clearly as the Fasces which still adorns the uniforms of every Guardia Civil in the country.

The American Party of Labor has sought to rescue and uphold the legacy of proud Communist revolutionaries and antifascists of the United States from the clutches of revisionism, Browderism, and opportunistic Brezhnevism. We recall the immortal heroes, including our own Comrade Jack Shulman, who once crossed the ocean to battle Spanish Fascists and uphold the spirit of proletarian internationalism under the banner of Comrade Stalin. It was the Abraham Lincoln Battalion of the 15th International Brigade which stood out as a shining example of why proletarian internationalism is at the heart of the revolutionary battle against capitalism. These brave antifascist heroes were the first historical example of a racially integrated military force assembled in the United States and the first military force in our history to be lead by a black man, the legendary Oliver Law. Through this experience we understand internationalism not to be separate from our work here at home, but in fact a fundamental part of the struggle for proletarian revolution. It is therefore our responsibility not only to working class Catalans, but to the working class and oppressed nation peoples here at home who suffer under the white supremacist capitalist system to offer this statement in solidarity to the people of Catalonia.

As Stalin reminds us in Marxism and the National Question, national liberation takes a variety of forms with respect to the particulars of every nation. Self-determination is seen as an essential right of every nation, but autonomy is not always the optimal outcome for proletarian forces. Each instance of the national question, which can be conceived of in bourgeois or proletarian terms, takes on a progressive or regressive character based on the present material conditions and the forces which drive them. In this regard, the Catalan question is subject to unique conditions which no other nation faces, as is the case with every nation.

Within the confines of the Catalan national struggle, there are clearly both proletarian and bourgeois forces which have fought for the heart of the movement. Prominent Catalan nationalists like Artur Mas, of the decidedly corrupt, disgustingly liberal, and socially backwards Democratic Convergence of Catalonia (CDC), played a key role in the government of the Catalan autonomous province. These forces have advocated for regressive policies on subjects like gay rights and abortion, and pushed for economic liberalism which only served to weaken the Spanish working class during some of the worst years of the economic crisis that gravely impacted the whole of Spain. Yet it was the left-leaning Catalan nationalist Popular Unity Candidacy (CUP) who lead the way towards removing Mas from the Catalan presidency. The working class forces are thus organized to a degree against the most egregious practices of economic liberalism. They work to push these elements to the margins of the Catalan national struggle.

The character of the struggle is not limited only to the internal struggles of the Catalan autonomous province. The exact borders of the Catalan nation are the subject of some debate, as the Catalan language extends far beyond the borders of what the Spanish government recognizes as “Catalonia.” Like the Basque Country, there is a French Catalan province, and there is a community of Catalan speakers in the Principality of Andorra. The Catalan language is also commonly used in a large portion of the Spanish province of Valencia, as well as the Balearic Islands and even as far as sections of Sardinia. This also raises the issue of how widespread Catalan culture is in these areas and to what degree those communities identify with the Catalan nation, if at all. In addition to the questions surrounding the Catalan communities in neighboring Spanish provinces, the Catalan national question also raises issues of organizing a proletarian Spanish revolution. A few Leftist parties and organizations have raised concerns with respect to the weakening of proletarian forces in Spain if Catalonia’s national liberation struggle were to take a bourgeois direction.

Yet the fears of a new, bourgeois Catalan state were subordinated in an instant by one of the most naked instances of capitalist repression we have seen in Western Europe in some time. The Spanish national bourgeoisie, many of whom were themselves former Fascists or related to former Fascists, proved that the “democratic transition” from the Francoist years were at best only a mild suppression of the state apparatus’ most violent instincts. Conditioned by years of the most chauvinist rule possible, the ruling Spanish bourgeoisie fell back on old habits the moment it felt threatened by both bourgeois and proletarian elements of Catalan nationalism.

Marx and Lenin made it clear that struggles between rival bourgeois camps were inevitable. This principle is not unknown to us here in the United States, where every four years the working class is condemned to choose between two color-coded camps of liberal mass-murderers. Yet in Spain, the prospect of nationalism was deemed such a threat to the whole of the Spanish project that the ruling bourgeois faction felt it necessary to rely on brutal violence to shut down a peaceful exercise of self-determination. And, as always, it was the working class Catalans who were dealt the worst of the abuse. The now widely circulated pictures of Catalan firemen bravely forming human chains to protect the masses from riot cops have made their way to every corner of the earth. At a time where the national question has taken center stage due in large part to the heroic, progressive struggles of the brave fighters in occupied Kurdistan, the willingness to engage in such public displays of violence against working class peoples seeking the most basic rights resonates clearly with the toiling masses.

The evidence of this anger is seen everywhere. In the neighboring Basque provinces, where a bloody struggle for national liberation has been at the forefront for decades, rallies in the thousands sprang up in solidarity with their Catalan comrades. As far south in Spain as Seville, working class Spaniards have taken to the streets in protest of government treatment of Catalans seeking only to secure the right to determine for themselves their own future. Freedom fighters in Rojava have issued statements of solidarity in support to the Catalan people. Communist parties across the globe have issued condemnation of the Spanish government for their egregious practices, which have only served to show the truth contained in the age old adage “scratch a liberal, a Fascist bleeds.”

These developments, along with the strong popular support for the Catalan referendum (90% of the vote, just under 50% of voter turnout despite the Spanish government’s efforts to shut down the elections) only serve to highlight the principles Comrade Stalin identified in Marxism and the National Question. Though the question of autonomy remains complex, unilateral repression of the right of self-determination is recognized by proletarian forces across the world as a grave injustice. While opinions on the Left remained divided on how progressive an independent Catalonia could truly be, the Spanish government has certainly, if grimly, demanded support from the international proletariat in favor of the Catalan people.

In solidarity with the peoples of Catalonia, as with Kurdistan and all other brave fighters of national liberation struggles,

Visca Catalunya!
The era of proletarian revolution has just begun!

The march continues in Chicago, where protesters, including indigenous activists, are mourning #adamtoledo #chicagoprotests
Thousands of protesters in Chicago’s Logan Square Park are gathering to mourn #adamtoledo and fight for #policereformnow #chicagoprotests
Defund and disarm the police, and put them under community control!
Happy Victory Day, comrades. Today in 1865 at Appomattox, the "cause" of slavery was "lost."
From the 35th anniversary of the Albanian party of labor.