Trump Tax Plan: For the Rich, On The Worker 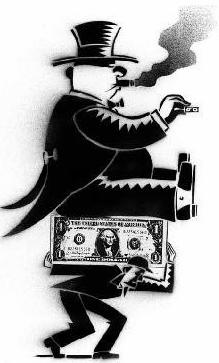 Before becoming President of the United States, Donald Trump made his name as a ruthless capitalist with an inflated ego and brutish business practices. Throughout Trump’s time as a capitalist exploiter, his actions towards the working class included massive suppression of organizing workers, kicking working families from their homes for profitable development deals, wage theft, and the breaking of labor laws. Given Trump’s grooming as a capitalist in ruling class society, it should be no surprise that as President he continues to brutalize working families for profit. While Trump has already reversed labor laws, the proposed “Trump tax plan” which was promised to be a break for the worker and their families, is instead preying on them.

On November 29, 2017, Trump made his way to the state of Missouri to promote his tax plan which was passed by the Senate nearly a week later. The first claim Trump made in his speech was that this tax plan was in favor of the working people of America, that it would mean tax cuts for workers and be “hard” on rich people, such as Trump himself. This is absolutely false. The lowest tax bracket, $0-19,050 will see a direct 2% increase in their taxes every year. Those in the next tax bracket see a moderate cut of 3%. This minor tax cut will be removed by 2023 when it will be replaced by a tax raise on those making over $40,000 a year and an increase on all tax brackets in 2025.

What the average American working family will see between 2018-2023 if the tax plan is passed is a slight reduction in federal taxes, given they file their taxes with the standard deduction as opposed to the itemized deduction. In fact, the proposed tax plan does away with itemized deductions. This means that the majority of deductions a person might claim on their taxes have been almost completely slashed, giving the worker fewer options for deductions and greatly reducing the amount of money the worker would receive for their tax return.

According to the Tax Policy Center, the savings Trump claimed would go to working families will do so only in the smallest way possible. By 2019, less than 20% of these savings will be found within working families who make less than $87,000 a year. A 3% tax cut becomes almost meaningless when the chances of a substantial return are nullified. Another major attack on working people through this tax bill is the continued attack on public education. With these deductions on state and local taxes being nullified, this now means that working people can no longer deduct the amount they pay in taxes for schools. All the while, private and charter schools continue to get subsidies and state funding. This is effectively defunding public schools while using tax dollars to fund private schools. This effect on tax breaks on public schools is not just a major attack on public schools themselves but a major attack on the millions of working people who send their children to public schools.

If trillions of dollars from the worker, the loss of deductions, and an impending tax hike wasn’t enough, buckle up: the new tax bill is even going after the American worker’s healthcare. The Congressional Budget Office has estimated that upwards of 13 million people could lose their healthcare as a result of the tax bill. This is in addition to the 23 million people who lost their healthcare due to the Trump Administrations healthcare cuts earlier in 2017.

The tax bill will dispose of the individual mandate penalties put into place by the Affordable Care Act. Some people will drop their insurance now that there is no penalty for not having health insurance. This will cause a rise in premiums, which in some states could mean an increase of between $1,500-1,700. While the wealthy can shop around for insurance, the poor, the working class, and especially seniors will be hit hard by these premium increases. The new tax bill will also increase the Federal Deficit by $1.45 trillion. This will give the incentive to cut spending to lower the deficit and, as always, Medicaid and Medicare are first on the chopping block. There are already talks of raising the age and income level to qualify for Medicaid and Medicare, which would leave many working poor and many senior citizens in the lurch.

But where does this leave the rich? After all, Trump claimed many times this tax plan would be hard on rich people like him. Trump even says that he has many rich friends who are angry at him for the bill. This is absolute nonsense. Trump believes the working person to be stupid and easily fooled. Most wealthy, under the proposed tax plan, would see their taxes lowered from 35% to 21% just by 2019. This is the largest tax break in history, and it is not for the masses of working people, but for the already grossly wealthy. These tax cuts for the rich are made up for by the loss of deductions a working person can claim on their taxes. Just by slashing the deduction to $10,000 for state and local taxes, over 44 million people will be affected, resulting in an estimated 1.4 trillion dollars of new tax revenues built on the backs of working people.

By limiting the tax deduction on state and local taxes, this change is expected to drain money from large high-tax cities, lowering property values, giving less money to the public fund for the city to provide public works, such as roads and schools. Working people who have a mortgage at less than $750,000 will no longer be able to claim a deduction for that mortgage. Students will not only be taking on debt from student loans but expected to pay taxes on them as if loans, scholarships, and grants were income. Already, the wealthy on average pay only 15% in taxes because they afford elite tax lawyers. Not to mention the trillions the rich hide away in offshore accounts. Even the estate tax has been lowered so that heirs to property, money, assets/securities won’t have to pay a cent unless the value of those assets exceeds $22,000,000, and then the rate is on a sliding scale. To increase direct profits for the rich, the American working class as a whole will be charged for the difference. While the workers see minor cuts that will be replaced by an increase in just a few years, the richest will be making trillions more in profit.

There is, however, another winner to the Trump Tax Plan: foreign capitalists. During his campaign, Trump often spoke of the “globalists” who are attacking the white blue collar workers in America. This became a rallying cry of reactionary sentiment. The far-right has used the term “globalist” as a codeword for “non-white capitalist” and most often, a Jewish capitalist. This kind of divide between people is simply another means for the upper-classes to divert blame from the rich, and divide the international and domestic working class along lines of ethnicity and national origin. While globalists certainly exist, they exist not because they are ethnicity X or nation Y conspiring for control, but because they are capitalist who exports their capital across the globe in order to generate profit from speculative finance and currency markets, and exploit workers in countries with fewer workers’ rights. Trump himself is a globalist, with capital assets across a number of continents. However, Trump has betrayed the honest, angry, and scared working family who needed something to blame for their wretched conditions. Trump and his fellow capitalist cohorts were certainly not going to attack themselves, only use the rhetoric to divide and divert the American working class. As it stands, foreign investors of more than $6.5 trillion worth of American investment fund shares and equity, along with nearly 35% of American corporate stock. With lowering of the corporate tax rate to 20%, foreign capitalists, the “globalists” Trump spoke of, will find themselves an increased profit of $52 billion a year. Globalization, post-cold war global capitalism, has integrated world markets, making a profit in the United States an international affair. While American working families have their deductions slashed and their minor tax cuts dissolved and raised in just a few years, foreign investors will be making billions.

The proposed tax plan given by Trump and the Republicans is, like most legislation passed in a capitalist society, an attack on working people. Deductions will be cut. Millions, literally millions, will lose healthcare. The slight reduction in the tax rate is fleeting at best, only waiting to be replaced by even higher taxes for working people. In the meantime, the rich find themselves making, even more, money off of the working class as a result of dramatic tax decrease. Foreign capitalists will also profit from this decrease. Everyone is making money from this tax plan except for the American worker, who already has up to 300% of the daily value that they create stolen from their wages.

Trump has lied to a devastated working class to make himself and his fellow capitalists across the globe richer. In doing so, he has empowered the far-right who, despite claiming to be against globalists, back the plan as it makes their more affluent supporters richer. After all, while there are reactionaries amongst the working class that support the alt-right movement, the movement itself is mostly made up of upper-middle-class Americans who gain profit from the blight this tax plan puts on the working class. The global capitalist class is attacking workers in the United States, and the proposed tax is just another nail in the class coffin that is suffocating all working class people. The proposed tax plan is just another means of ammunition for the class war of the capitalist class against the workers, the mass of people. Let us unite against such attacks, from now until the capitalist class that preys on the working people of American and world is scourged from our land!

Like Loading...
‹ Morales’ Bolivia in 2017: Political Report of Revolutionary Communist Party of Bolivia
Service to the People: Community Control Now! ›