Labour Party of Turkey (EMEP) Chair Selma Gürkan: Discussion on Unity Should be Focused on Demands 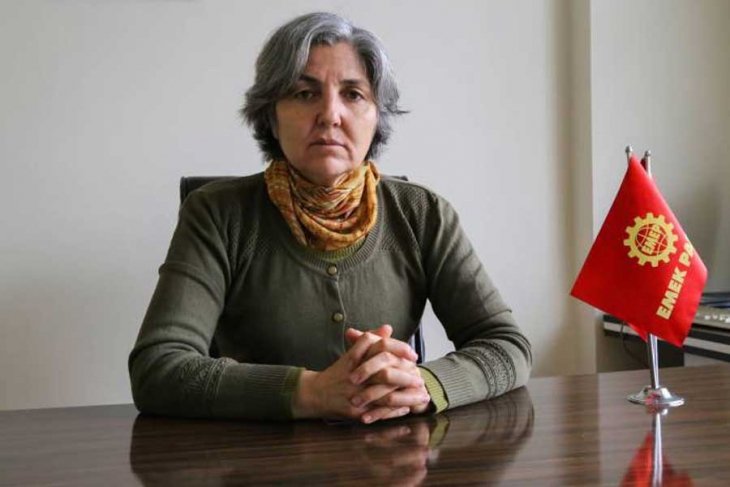 We talked about the 2019 elections and the discussions on alliances with the Labour Party (EMEP) Chairwoman Selma Gürkan.

AKP [The Justice and Development Party] and MHP [Nationalist Movement Party] declared that they will enter the elections in 2019 as a ‘Presidential Alliance’; this led to an escalation in the attempts to introduce legal changes to facilitate this. The election legislation – brought to the parliament and made up of 26 articles – includes general rearrangements and provides a legal basis for ‘alliances’; as well as legitimising the presence of police and armed forces at the ballot boxes; and unstamped voting cards to be declared valid. The Labour Party (EMEP) chairwoman Selma Gürkan answered our questions on these issues.

‘OHAL SHOULD BE LIFTED, KHK’S AND THEIR CONSEQUENCES SHOULD BE RETRACTED’

OHAL [State of Emergency] and KHK’s [Emergency Decrees of Law] introduced following the attempted coup are continued. There are also indications that new interventions following Afrin are likely. What will an election under these conditions look like?

Turkey is run under OHAL conditions for the last two years. OHAL includes bans, prohibition, silencing of the opposition, and suppression of demands for democratic rights. The government also thinks that, with the addition of the Afrin offensive and its policies of warmongering, it will be easier to win the election. Looking at the events around 8 March alone demonstrate a picture of Turkey under OHAL. Marches and rallies were cancelled in many cities. How democratic will an election under OHAL conditions be and how much it will the ballot box reflect the will of the public are debatable.

‘THE NEW ARRANGEMENTS WILL PROVIDE LEGAL ASSURANCES TO INTENTIONAL MISCONDUCT’

The election legislation includes some actions observed during the referendum on 16 April, which received a reaction from the population. Even if OHAL was lifted, do these arrangements not mean that this will be an election under the shadow of OHAL?

The election law is a legal guarantee for the illegal interventions that were witnessed in the [constitutional] referendum on 16 April. Even if OHAL was lifted, if we go to an election with this law, the outcome from the ballot box will be tainted. This can be seen in every single one of the 26 articles. Let’s look at one: people living in the same block will be spread to different polling stations; previously those that lived on the same block would have voted at the same polling station. This enabled quick detection of any unusual registration of voters at that box. During 16 April [constitutional elections, 2017], 1 November [general elections, 2015] and 7 June [general elections, 2015] many people saw individuals they didn’t know registered at their addresses. Those that investigated their lineage online find out documents that point to relatives that could not be the age stated. It reminds you of the novel ‘Dead souls’…this leads to a concern that ‘they will get all the dead to vote’.

All 26 articles within the law are undemocratic.

‘THE STRUGGLE AGAINST THIS LEGISLATION MUST BE UNITED’

If this legislation is passed, what will happen if OHAL  is not lifted? Would a boycott be considered?

Obviously, it will greatly tarnish the legitimacy of the election. Hence, we believe that we need to start the struggle against going to an election under this legislation. One foot of this will be the parliament. The exposure by HDP [Peoples’ Democratic Party] and CHP [Republican Peoples’ Party] – both opposed to the legislation – will be important. But, if this struggle is limited to the parliament it will be incomplete. We need to go out in the streets to tell the people that this is an anti-democratic legislation and that it means the seizure of the will of the people. The struggle of the powers of democracy, workers and peace in the country must also be united.

To believe that ‘everything is concluded’ would be a show of despair; surrendering from the start. The election legislation is widely discussed in political and civil circles.

We could utilise the struggle against this legislation to form the base of joint struggle platforms in the period we are entering.

Indeed, a boycott remains a democratic option. Given the conditions of the day, a boycott is not a legitimate option. To bring about a new political option through a boycott, the majority of the population must have lost political faith in the leadership and be in a search for an alternative. What needs to be done today is the organisation of the struggle against this legislation.

‘PRESIDENTIAL ALLIANCE IS THE DRIVING FORCE OF REACTION’

What are your thoughts on the ‘Presidential Alliance’ of AKP and MHP? There are attempts to create a united front against this alliance…

The alliance of AKP-MHP, with support from BBP [Great Unity Party], is not an election alliance as is portrayed. Of course, the elections are a part of their alliance but what they are saying is “This is a union for the reshaping the rulership, a political union.”

Their unity is agreed on these points: restriction of political freedoms; prohibition; curtailment of democratic rights and freedoms, primarily the freedom of expression and speech; warmongering and polarising policies…Representing reaction, this coalition is also the building force of the one-man, one-party regime. Therefore, it is shaped as the political force and the will behind the building of a political regime based on fascism.

‘ERDOĞAN IS TRYING TO CREATE A BIPOLAR POLITICAL SYSTEM’

In creating a coalition based on representation of the right, nationalist and conservative circles and the most reactionary cliques of the bourgeoisie, Erdoğan is also trying to create a bipolar political system.

On the one side is the rightwing, nationalist and conservative political focus, shaped around him; on the other side is the leftwing-socialist and other political and social sections around CHP. He believes a bipolar political arena like this will benefit him more. This is the source for his arguments around CHP and HDP. Calling it national and local – and this alliance is anything but – in order to ascribe himself some positivity, he uses language that demonises all the forces that could unite on the other side. We believe that faced with a coalition that represents political reaction, all the forces that stand against and that want to fight against it need to achieve a unity that combines their common struggle.

What would the uniting principles be for a possible union against the ‘Presidential Alliance’?

Turkey has fundamental problems: unemployment, poverty, worsening economic conditions, polarisation, restriction of democratic rights and freedoms, restriction of political freedoms, freedom of belief, etc. There is a need for a political focal point that would meet the demands created by and formulate the solutions to these problems. Against this alliance of AKP and MHP, rather than a definition of an ‘alliance of political parties’; we believe the determining factor will be our answers to the questions of “What kind of leadership do we want?” and “What kind of a country do we want to live in?”; and whether the sections of the society that is united by these answers will come or at least act together. We are not talking about a unity under one roof but rather a united struggle. This was expressed partly as a ‘no’ front during the referendum.

The issue is to not have an outlook that will deepen the polarisation created by the government; we need to create the political conditions that will enable us to unite around the solutions to the issues in Turkey.

We want to open windows to each other rather than close doors in each other’s faces.

This is what I make of what you say: some of the names that stood for the ‘no’ front on 16 April will stand against Erdoğan in the first round of the presidential elections. Is the election strategy based mainly on the second round?

There are no clear tactics agreed upon; we are in discussions. We see these as extremely important discussions. Undoubtedly, socialists have an important role here. We must be able to create political reflexes that will identify the main issues and the solutions to these issues, rather than enter limited and narrow alliances. One is based on CHP’s alliance with the centre-right and the other on the alliance of CHP, HDP and leftwing-socialist sections. Neither option seems mathematically likely to really achieve the 50+1 percent. Hence, is there a ‘base’ that will include the whole of this front?

The outlook that says ‘Majority of the population in Turkey is nationalist-conservative. Therefore, the path to a victory is a nationalist-conservative coalition’ is wrong. This was proven to be the case both in presidential elections and local elections… Of course, we should recognise the conservatism, nationalism and chauvinism that exist within the population. Our conscious choice here has to be focusing on problems created by the 15-year rule of the government and how these will be resolved.

What we desire is a democratic alliance that can appeal to all the forces and one that all of them can easily say ‘yes’ to.

Like Loading...
‹ Message from the American Party of Labor to the American Kurdish Association
Imperialist Infighting in Syria and the Fall of Afrin ›