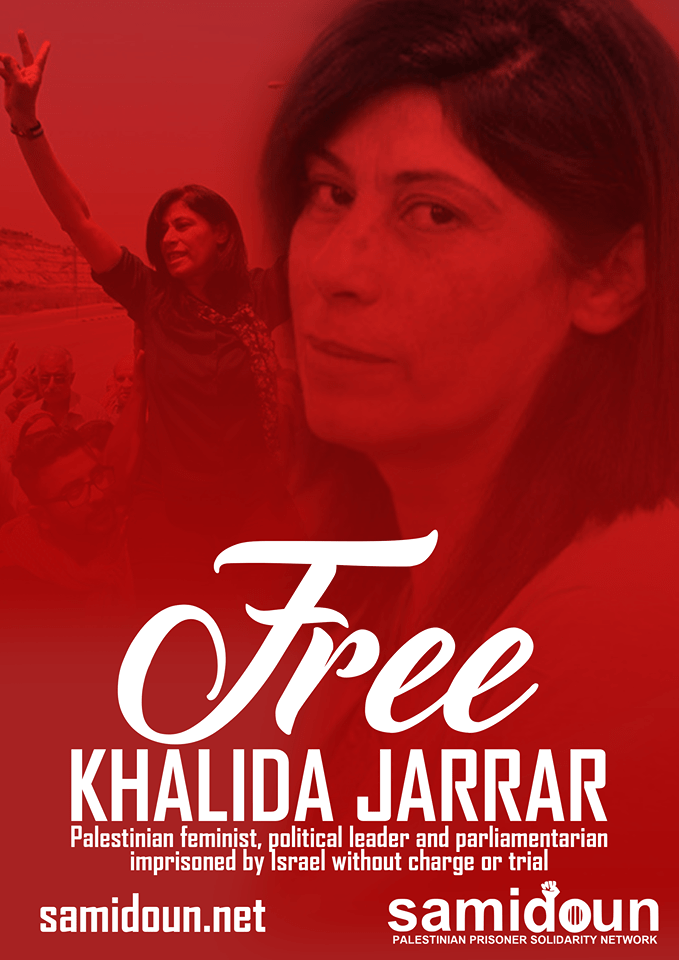 Over 180 organizations have joined together to call for the immediate release of Khalida Jarrar, the imprisoned Palestinian feminist, leftist parliamentarian. Jarrar, a leading advocate for Palestinian prisoners’ rights, has been jailed without charge or trial under Israeli administrative detention for nearly a year.

Jarrar has been jailed since 2 July 2017, when she was seized in a night raid on her home in El-Bireh by Israeli occupation forces.  On 14 June 2018, she was informed that her detention would be extended for another four months, a sentence that is scheduled to be confirmed in an Israeli military court on 2 July 2018.

We are calling for days of action for the freedom of Khalida Jarrar between 30 June and 2 July. It is more important than ever that our voices are heard and our actions are visible. Protests are already being organized in New York and elsewhere around the world. You can download flyers, materials and visit petitions to join the campaign here: http://samidoun.net/2018/06/take-action-to-free-khalida-jarrar-june-30-july-2-organize-for-freedom/

You are invited to add your organization’s name to the following statement to demand freedom for imprisoned Palestinian leader Khalida Jarrar! We will continue to update this statement and re-release with additional signatories. To endorse, please use the form or email samidoun@samidoun.net with your group’s name.

We, the undersigned organizations, come together to demand freedom for Palestinian political leader Khalida Jarrar, prominent leftist, feminist, prisoners’ rights advocate and member of the Palestinian Legislative Council. She has been imprisoned without charge and without trial since July 2017 – and now the Israeli military occupation has declared that her imprisonment will be extended for an additional four months.

On July 2, 2017, Khalida Jarrar’s home was raided by Israeli occupation soldiers in a pre-dawn raid. She was ordered shortly thereafter to administrative detention, imprisonment without charge or trial. She is one of approximately 450 Palestinians held under administrative detention, a relic of the British colonial mandate that has been used by the Israeli occupation to jail thousands of Palestinian community and political leaders, and one of approximately 6,100 Palestinian prisoners in Israeli jails.

In December 2017, her detention was renewed for another six months. Now, another military order declares that she will be imprisoned for four more months. Administrative detention orders can be issued for up to six months at a time and are indefinitely renewable. Palestinians can spend years at a time jailed under these orders, never knowing when they could be released, if ever.

As Addameer notes, “This practice of arbitrary detention is a grave violation of international laws and human rights standards, particularly articles 78 and 72 of the Fourth Geneva Convention which state that an accused individual has the right to defend him/herself. This also violates Article 66 of the Fourth Geneva Convention and the basic standards of fair trial.”

On July 2, an Israeli military court is scheduled to approve the detention order. Jarrar, like all administrative detainees, has boycotted these hearings since February, as they are mere rubber-stamp sessions used as a fig leaf to “legitimize” the arbitrary imprisonment of Palestinians.

Khalida Jarrar is heavily involved in the fight to hold Israeli officials accountable for war crimes in the International Criminal Court. She is a member of a Palestinian commission charged with bringing complaints and files before the international court about ongoing Israeli crimes against the Palestinian people, from attacks on Gaza to land confiscation and settlement construction to mass arrests and imprisonment.

Since 1998, she has been forbidden to travel outside occupied Palestine. When she needed medical treatment in Jordan in 2010, she struggled for months in a public campaign before finally receiving it. The Israeli occupation attempted to forcibly displace her from her home to Jericho in 2014, and in 2015, arrested and jailed her 14 months for her political activities.

The extended administrative detention of Khalida Jarrar is an attempt to remove an effective, grassroots leader from the Palestinian national movement. Especially now, when people are taking to the streets throughout occupied Palestine and thousands are marching in Gaza for the Great Return March, leaders like her are targeted for arrest and imprisonment in an attempt to defuse the Palestinian struggle.

We come together today to demand the immediate release of Khalida Jarrar, an end to the policy and practice of administrative detention and freedom for Palestinian political prisoners in Israeli jails. We pledge to struggle for justice through protests, actions, organizing and escalating boycott, divestment and sanctions (BDS) actions against Israel, in Khalida’s own spirit of resistance.

Like Loading...
‹ Trump’s Camps are a Fascist Foundation That We Must Dismantle
Red Aid: Service to the People ›