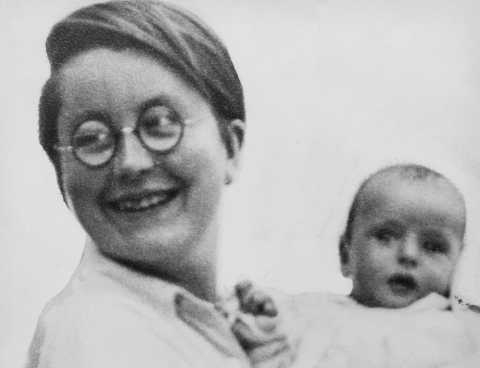 Liselotte Herrmann, KPD partisan murdered by the Nazis in 1938.

Originally published in Arbeit Zukunft, the paper for the Organization for the Construction of the Communist Workers Party of Germany.

On June 20, 1938, communist and anti-fascist partisan Liselotte (Lilo) Herrmann was executed by the murderous henchmen of the Nazis by guillotine at the age of only 29 years old. She was murdered, even though she left behind her infant son, Walter. He was raised by Lilo’s parents.

Lilo Herrmann had resisted Nazi barbarism from day one. Fritz Rau, the father of her child and who had also been in the resistance, was brutally beaten to death on December 20th, 1933 by Nazi henchmen in the Berlin Moabit prison.

Lilo Herrmann joined the KPD as a communist in 1931. She consciously took the side of the exploited, the revolutionary workers’ movement, and fought for socialism and communism.

While she studied biology in Berlin, she participated in organizing student resistance, criticizing the rampant biological racism of the Nazis. She asserted herself against Nazi students, who increasingly attacked outspoken Jewish and anti-fascist students and university teachers. It is said that after the Nazis came to power, she signed a now lost “call to defend the democratic rights and freedoms at Berlin University.” Together with 110 Berlin students, she was expelled from the university in July 1933, “for communist activity.”

Lilo Herrmann continued to support the underground resistance in Berlin and earned her living as a child care worker. In September 1934, she moved to Stuttgart with her newborn child and worked in her father’s engineering office, where she lived with her parents. She also took part in the anti-fascist resistance and supported the wanted KPD district leader Stefan Lovasz. On 7 December 1935, the Gestapo arrested her in her parents’ apartment at Hölderlinstraße 22. Today a “Stolperstein” in front of the house commemorates the location.

Preparations for Hitler’s war of conquest were already in full swing. Therefore, the anti-fascist partisans saw it as a critical task to publicize Hitler’s secret rearmament to the world. They also obtained relevant documents. Lilo Herrmann was found with the secret plan of an underground ammunition factory, which the KPD had handed over to her for forwarding abroad, an act of high treason worthy of death to the Nazis. On June 12, 1937, the “People’s Court,” notorious for the deliberate public humiliation of defendants by the roaring “blood judge” Roland Freisler, sentenced Lilo Herrmann, together with three comrades-in-arms, to death.

A broad international solidarity campaign could no longer prevent the murder. On June 20th, 1938, 80 years ago, Lilo Herrmann was beheaded together with Stefan Lovász, Artur Göritz and Josef Steidle in Plötzensee Prison, Berlin. For the first time in Nazi Germany, a young mother died under the guillotine because of her anti-fascist resistance.

Lilo Herrmann in the face of torture and death threats, according to a Gestapo interrogation log: “If I am questioned about the known goal  of Communism, then I can express it in one sentence, and it is: the greatest happiness of the greatest number…if I am asked again how I imagine the way to this goal, then I answer: By persuading the masses and creating a majority for communism.” Honor the memory of Lilo Herrmann and her comrades!

Even though she studied chemistry at the Technical University at Stuttgart before studying biology in Berlin, it’s successor, the University of Stuttgart, refused to remember her with this memorial stone—an outrage! Professor Eberhard Jäckel, in 1988, revealing his true nature: “The convictions Lilo Herrmann advocated for cannot be the convictions of universities.” What was her conviction? That Hitler will lead to war! That was the conviction of Lilo Herrmann. And she had everything right. To help prevent this war, she used her life as a fighting, revolutionary example!

Lilo Herrmann’s Example is more relevant than ever!

Protected and supported by the German state, the judiciary, and the police, the Nazi demon again spreads under the legal guise of the AfD and other Nazi parties. Germany under Merkel is rearming, and struggling with dominant US imperialism for power and influence. The threat of war is growing worldwide, but Germany is also stoking fires worldwide with arms deals and military operations. Our main enemy is in our own country.

Since the contradictions with Trump and US Imperialism have dramatically escalated, Berlin has become more and more determined to “take their fate into their own hands:” massive armament plans, ever-brazen nationalism, xenophobia, and Neo-Nazis continuing to poison and exacerbate the public climate. There is massive harassment against trade unionists and unions. The capital and government-sponsored digitization project “industry 4.0,” also includes far-reaching attacks on the collective bargaining rights of trade unions and workers.

It is time, in the spirit of Lilo Herrmann, to take the resistance against the threat of war and against the right and fascists into your own hands!

Like Loading...
‹ Pride Means Fight Back
“Karl Marx’s Legacy in the Reinvigoration of the US Labor Movement:” Presentation by the American Party of Labor at the 22nd International Seminar on the Problems of the Revolution in Latin America. ›