Home › Imperialism › Declaration of the 22nd International Seminar on the Problems of the Revolution In Latin America: “The Validity of Karl Marx’s Revolutionary Thought.”

Declaration of the 22nd International Seminar on the Problems of the Revolution In Latin America: “The Validity of Karl Marx’s Revolutionary Thought.” 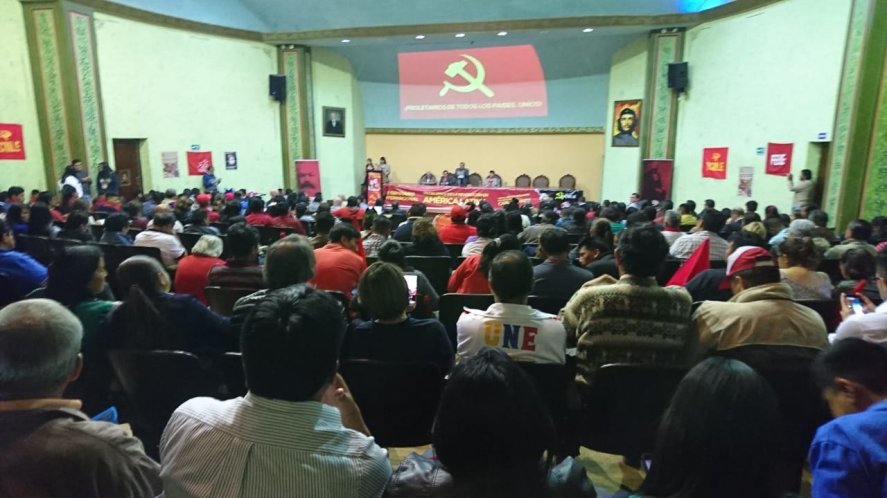 There are many occasions in which the defenders of capitalism have proclaimed the obsolescence of Marxism and the certain possibility of the triumph of the social revolution of the proletariat. Since its emergence, more than a century and a half ago, they talk about the failure of socialism and – metaphorically speaking – they never tire of celebrating their funeral. However, two hundred years after the birth of Karl Marx, his ideals travel the planet with the same or greater force when the communists proclaim their call to conquer a world with freedom and equity.

The genius of Karl Marx and Frederick Engels gave humanity a scientific worldview that allows us to interpret and understand all the phenomena that arise in society, nature and thought. The scientific character of universal knowledge has as its basis the materialist dialectic and the development that the sciences experience demonstrate that this method is correct.  The progress which is constantly produced in science and technology was foreseen by Marx as an essential historical phenomenon in a certain stage in the of development of humanity and these have a deep philosophical content This, then, is a concrete form of the dialectical relationship between theory and practice, a confirmation that first illuminates the actions of society.

Marxism revolutionized the conception of universal history. Where the scholars of the time saw chance, or the individual will converted into reality, Marx discovered objective laws that explain the processes of development and decay of societies, the temporality of them; he observed in the class struggle and in the action of the masses the locomotive that drags history,  He exposed the essence of capitalism, its internal contradictions and its manifestations, the moments of its development and moments of crisis, the social configuration that this system engenders, the conversion of everything – including the labor force – into merchandise, the nodal point of the reproduction of capital: the extraction of surplus value. The precision of his analysis leads to the fact that today, in the conditions of the development of capitalism in its imperialist stage, even those who do not identify with Marxism seek in his writings the correct interpretation and responses to phenomena, such as the economic crisis of 2008.

A small number of people and monopolistic groups concentrate wealth worldwide, while millions of human beings are unable to solve their daily sustenance.  This is the social character of production and the individual appropriation of what is produced is at the base of this phenomenon.  No economic “model” of the bourgeoisie and opportunism has been able, nor can it, solve this problem of capitalism.  One cannot put an end to exploitation among human beings if it is not on the condition of abolishing private property on the means of production, for which, “the first step of the workers’ revolution is the elevation of the proletariat to the ruling class” in order to “gradually tear all of capital from the bourgeoisie”.

That is why the social revolution of the proletariat has an international character in its content, although its form develops individually in all countries; for this same reason, we accept as our own the struggles of the workers and the peoples that are unfolding in all parts of the planet, and we encourage them with our solidarity, with our internationalist spirit. Marxism has not expired. It has full validity because in its conception it raises for itself a continuous updating according to the changes that are operating in the economic, political and social environment. We must strengthen our parties and organizations as revolutionary vanguards and deploy greater efforts to integrate Marxism-Leninism into the concrete reality in which we develop our struggle, to give a just response to the problems that the organization of the social revolution of the proletariat imposes upon us.

Marxism is the patrimony of the workers and the peoples, they have an instrument that guides their struggle, in any of the ways that circumstances require, to reach emancipation from exploitation and oppression, to put an end to all kinds of imperialist dependence and colonial domination. We raise it up with the conviction of its scientific strength, its revolutionary strength.  Against the winds that reaction and opportunism blow, the seed of Marx spreads throughout the planet and the tree of revolution flourishes in consciousness, in the struggle of workers, peasants, youth, women and peoples ; We will cover the world with fraternity, solidarity, freedom, social equity, with the red flags of the world proletarian revolution.

Union of the Youth Rebellion – Brazil

General Union of Workers of Ecuador

National Council of the Popular Committees of Martinique

Union of the Revolutionary Youth of Mexico

Unification Committee of the Marxist Leninist Communists of Peru