Home › U.S. News › The Church and State Against the Poor: A Local Story

The Church and State Against the Poor: A Local Story 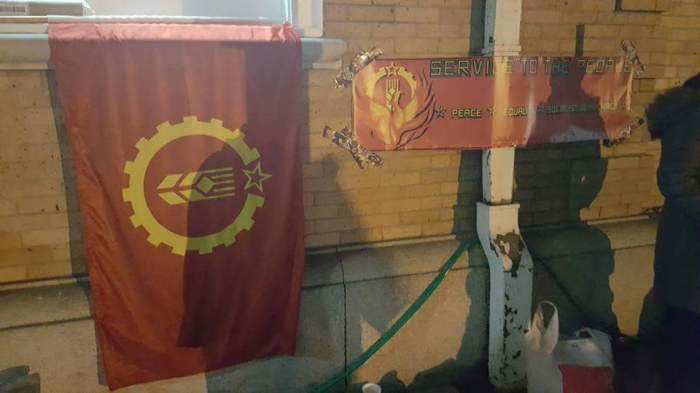 Nearly three years ago, in New Brunswick, New Jersey, a social worker who had once been homeless in that same city began to take steps in to trying to help the epidemic of the homeless. Independently of this, the American Party of Labor (APL) decided to create a program along the same lines, what we now call “Serve the People,” after the Black Panther Party’s program of a similar nature. The New Jersey division of the APL began a food and clothing drive in order begin this. In this process, it was discovered that Walter had also been trying to establish a homeless outreach program. Given Walter’s respect, knowledge, and reputation in the community we wished to serve as communists, it only made sense to team up. And, while many people may have turned away a group of communists, Walter welcomed us, and through working together we have begun to build a people’s project in New Brunswick. However,  both the government and church apparatus have begun to work against our continuing progress.

New Brunswick was a city founded around the establishment of Rutgers University in 1776. And, yes, the University was built by slaves. While the name of the University is now widely known, it wasn’t always this way. For the most of its history, the University had been simply regarded a good state school. Given its establishment in the city, Rutgers always had a political voice in it. This began to grow as the college grew. New Jersey is the most densely populated state in the country, and the University’s population blossomed along with the state’s. Rutgers began buying more land and constructing buildings in New Brunswick, buying and absorbing other colleges. Soon, the University’s capital encompassed three cities, with further campus extensions into Newark and Camden and has been added into the “Big 10” groupings of colleges. Rutgers’ capital expanded, as did its political influence in local and state governments.

The other major player in New Brunswick is the multi-billion dollar institution of Johnson & Johnson, a monopoly pharmaceutical company established in New Brunswick in 1886. One will see many of their products walking down an aisle of toiletries in a drug store or supermarket. But the company has a terrible history of exploitation and abuse, not just of its own workers, but the American public at large. The company has put dangerous chemicals in their products to sell them cheap which have led to sickness and death, including that of babies and children. The company has conducted cruel and unusual experiments on human prisoners and animals, and have influenced with their capital both fields of mental and physical health to turn a profit at the working consumers’ expense.

Throughout most of the 20th Century, New Brunswick was a city of projects. While its outlying suburbs saw its growth with the white post-war middle class, the city itself saw degradation and poverty for its poor and mostly black and Latino population. When neo-liberalism came in the late 70s and early 80s the ripples of change began with Johnson & Johnson acquiring more and more property and land in the city. The company started and acquired many diverse companies under its corporate umbrella. Rutgers, having been reformed into a neo-liberal institution, began focusing on profits before anything else. The vertical integration allowed by neo-liberal economics allowed both Rutgers and Johnson & Johnson to buy up the city, and even work together in doing so.

Evictions happen daily in New Brunswick. Many people are thrown out with nowhere to go. Many of the houses and buildings these American working citizens are being thrown out of are soon bulldozed over, and trendy condos, restaurants, and clothing stores replace them. Gentrification of New Brunswick started over 30 years ago, and not only continues but intensifies daily. With this comes an explosion of the homeless population. The city of New Brunswick has a growing homelessness epidemic directly caused by this history and the actions of a few monopoly capitalists.

Shortly following the linking up of SHILOH, a group made up of social workers and religious volunteers, with the APL, outreach to the homeless grew quickly. Every Sunday night for the past three years, the Party has worked with SHILOH to feed, clothe, and give aid the homeless. We serve over 100 people every weekend. When we get donations during the week which would spoil by Sunday, we go out and feed and clothe the poor workers, the homeless, and downtrodden of New Brunswick. The program has been able to help people find jobs, find a place to live, and get into programs to help them work to improve their condition. All of this was without help from the government or any capitalist institutions.

The “Serve the People” program is now under its greatest attack to date; in the past the program has had to deal with repression by city police. While our people have been harassed and intimidated, there has been no violence thus far. Johnson & Johnson have gotten their cars ticketed a few times because of the proximity to their headquarters. Despite this, police harassment of the homeless has grown greatly in New Brunswick just as it has all over the country. So much so, there have been times when only a few show up to the program because they are afraid to congregate together.

On the advice of the Reform Church, which has supported and contributed to our efforts, SHILOH applied for status as a religious non-profit in order to apply for state grants. Doing so would mean the Reform Church would give a recommendation to our entrance, which they did. However, the Reform Church is not the only religious institution in New Brunswick. A number of local churches have petitioned against the grant requests and our expansion, the Catholic Church being the most noteworthy. The church considers itself to have a monopoly on the poor.

Rutgers and Johnson & Johnson have worked jointly against “Serve the People”s efforts to expand, particularly when it came to the establishment of a new homeless shelter. The small shelter in the city fits only a few dozen people, while there are hundreds on the streets. This shelter has a history of serving stale food, a carbohydrate-heavy diet, and letting case workers drop clients left and right. A Code Blue, when certain designated buildings in the city have to open themselves up to the homeless, may only be called when the temperature reaches 28 degrees or below. The need for space for the homeless, better conditions, and a place for them to learn skills and programs to get off the streets is urgent.

Between ourselves and SHILOH, the requirements for the procurement of a shelter were in order. We had enough social workers and volunteers. The paperwork had been filed. It took longer than expected due to the church preventing our funding (capitalist bureaucracy is expensive, after all). The social workers had been ready to meet with city and county government officials. A meeting did take place, but behind closed doors, and not in the way we wanted: the officials met with Johnson & Johnson representatives instead of the program. The space we had picked for the shelter was denied because it was too close to Johnson & Johnson property. The space chosen had been a block of abandoned houses, none of which were in use. No doubt Johnson & Johnson has plans of its own for the property.

We moved to another location, a building that had been abandoned for five years, if not more. The building was on the Cook/Douglass Campus at Rutgers. Not only did Rutgers meet with government officials without us, as Johnson & Johnson had done before, they did so also with the help of the church. The Catholic Church told the city that we did not have enough social workers and volunteers, which we do. Rutgers complained that it might bring a “bad element” around its students. Of course, the University does not care when many of its students can’t afford to live in a dorm and move into non-gentrified areas of the city.

The state has also been monitoring the program’s activities. We know of at least one plant, who pretended to be a homeless person to gather intelligence. We know this person is an informant because they gave a report to state officials at a state legislator’s meeting only a couple of weeks previously. More cops sit in their vehicles and watch us. We volunteers are subject to more and more random scrutiny and inspection.

Still, we will continue to serve the people in every way we can. The homeless, the workers in poverty, and the city’s most oppressed will always have Party to count on. The struggle becomes harder every week, but the more we are impeded, the stronger our nerve grows. We will not stop working for justice for the people of this city, we will not stop expanding our activities and operations, and we will not stop working towards our ultimate goal: a system of power in New Brunswick that is not only separate from the capitalist government, but actively undermines it.

Like Loading...
‹ Reportback: We Won’t Allow Fascists in Philadelphia
Declaration of the Revolutionary Communist Party of the Ivory Coast: “On the Current National Political Situation and the Tasks of the Peoples” ›

The march continues in Chicago, where protesters, including indigenous activists, are mourning #adamtoledo #chicagoprotests
Thousands of protesters in Chicago’s Logan Square Park are gathering to mourn #adamtoledo and fight for #policereformnow #chicagoprotests
Defund and disarm the police, and put them under community control!
Happy Victory Day, comrades. Today in 1865 at Appomattox, the "cause" of slavery was "lost."
From the 35th anniversary of the Albanian party of labor.