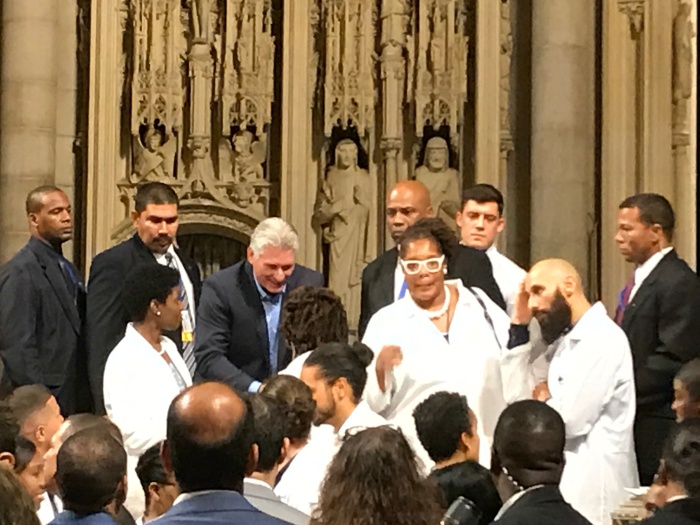 On Sept.26, The president of Cuba Miguel Diaz-Canel spoke at the event “Cuba Speaks for Itself”at the Riverside Church in Harlem, New York hosted by the September 25th Welcoming Committee and several solidarity groups from New York and New Jersey. In the wake of the former president of Cuba Fidel Castro Ruz’s visit in 2000, president Canel’s visit gathered around 2000 people. Although the room was packed, moderators of the event called guests to give space to other guests who were still waiting outside at the front of the event.

The crowd was so excited. At the beginning of the event, the chants “Cuba Libre / Free Cuba” and “Que Viva / Long Live” were heard a lot. After Gail Walker, Executive Director of IFCOO/ Pastors For Peace and Frank Velgara made opening remarks, the Healing Drum Collective, the Riverside Church Praise Team, and Cuban pianist Dayramir Gonzalez presented their musical performance to guests. 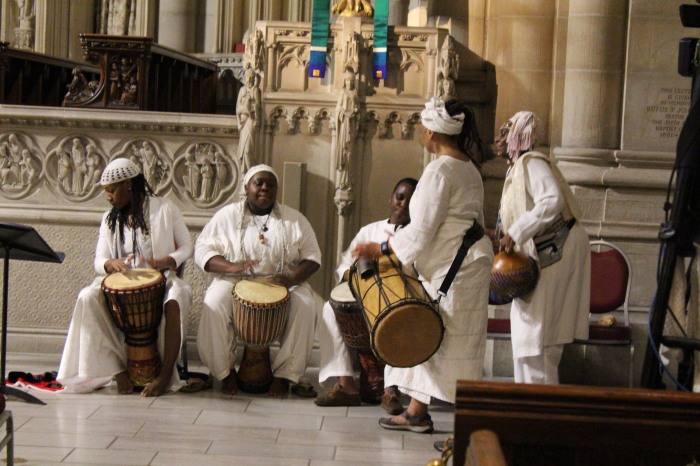 US graduates of the Latin American School of Medicine (ELAM) took to the stage as well to introduce the opportunities that the Cuban state provided. Over 28,500 medical students from 103 countries have graduated, completely free of charge, from ELAM since the first graduation in 2005.

In the event, a press releases issued by the Permanent Mission of Cuba to the United Nations was distributed to the press members and guests. According to the September 14, 2018 press release, the “National Security Presidential Memorandum on the Strengthening of the United States Policy toward Cuba” signed on June 16, 2017, in Miami by the current Donald Trump administration has caused a setback of the position of the previous Obama administration.

As a consequence, the US departments of Commerce, Treasury and State issued new provisions and regulations. Restrictions and limitations to trips and educational trips were imposed, which caused a decrease in travelers from the US to Cuba during 2018, negatively effecting tens of thousands of Cuban workers.

According to the same press release, the Department of State issued a “List of Restricted Cuban Entities and Subentities,” which included 179 companies. The aim of this measure is “to continue to impede the economic and commercial relations of Cuban companies with the potential US and third-country partners.”

The President of Venezuela, Nicolás Maduro: “We have been the victim of unanimous imperialist aggression”

One of the last speakers of the event was Venezuelan president Nicolás Maduro. After president Maduro addressed the general debate of the 73rd Session of the General Assembly of the United Nations, he attended the event “Cuba Speaks for Itself”

His stated reason for attending was “to bring the truth of Venezuela, and to expose it to the US people… to bring my love and solidarity to all of you and to share with my dear brother, the president of Cuba, Miguel Díaz-Canel and Cuban people in all”

He underlined that Venezuela has been “the victim of a great imperialist aggression.” However, he ended his speech by saying that “The Bolivarian revolution is standing, is alive and is victorious.”

Miguel Díaz-Canel, The President of Cuba, said Cuba is in favor of total disarmament and international solidarity

Newly elected president of Cuba, Miguel Díaz-Canel, made several remarks on the current struggle of the country, historical moments that took place in the church, and Cuban foreign policy.

President Canel stated that they are “in support of Venezuela, in support of Nicaragua, in support of Puerto Rico, and in support of all Latin America, Palestinian and Saharan people, and all just causes around the world, and also to denounce very unfair blockade that the US government has imposed on us for nearly 60 years”

He expressed and shared many emotions in the cathedral as he remembered the past, when the leader of the Cuban Revolution, Fidel Castro Ruz, visited Harlem in 1960 and 2000. The Cuban president said “In order to for us to get here, we drove through the Harlem neighborhood. The place of legendary hotel Teressa, which welcome our first revolutionary delegation to the UN and hosted meetings of great men of the 20th century, for Fidel met Malcolm X, Nasser, Nehru, and Khrushchev.” He added one of Fidel Castro’s personal memory “He had personally told his comrades I am going to Harlem because that’s where my best friends are.”

President Canel also remarked that “Cuba is not a large or powerful country. Not rich in natural or resources, but these limitations have not stopped us from practicing solidarity on the basis of sharing what we have.”

He pointed out that “This is why when Cuba comes to the UN General Assembly and promotes cooperation and solidarity, as opposed to threats, competition, racism, and selfishness, Cuba does so with the authority of the people that have shown it is possible to achieve those goals in a country that has turned words into concrete actions.”

Cuba helped to educate more than 1 million professionals who have served several countries in Asia, Africa, Latin American and the Caribbean since the revolution. Over 42,000 professionals, particularly medical staff, currently are in the service of those countries for engineering, health and medical services, agronomy, and other important domains of development.

The Cuban president claimed that “I would dare to say that with 5% of that (armament) expenditure a lot of people would be lifted out poverty…The foreign policy of the Cuban revolution maintains its consistent position in favor of total disarmament and international solidarity.”

Like Loading...
‹ “Hold the Burgers, Hold the fries, Keep Your Hands off Our Thighs:” Fight for 15 mobilizes to fight Sexual Harassment in the workplace.
Interview: Ernesto A. on the Alienation of Disability ›