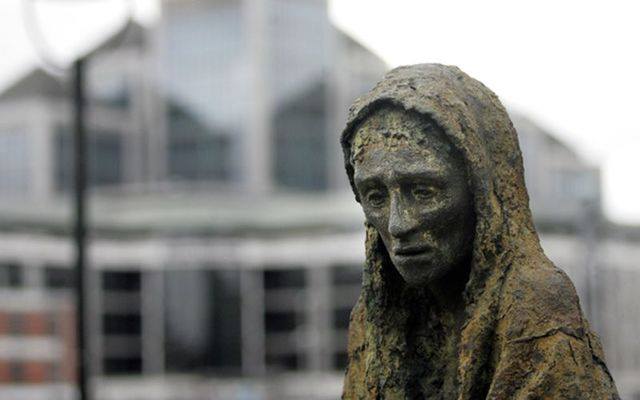 Monument to the victims of the Irish genocide, Dublin, Ireland.

People will gather in over 97 locations across more than 13 nations this Saturday, November 3rd, 2018, to hold commemorations, vigils, and masses in commemoration of  the Irish Genocide of 1845-1852.

Commonly referred to as the “Great Famine, Great Hunger, or Irish Potato Famine”, the purpose of this year’s commemorations is to propagate the findings and works of Chris Fogarty and spouse Mary Ó Sullivan who, as of 1983, began to expose this atrocity as not simply a famine, but a genocide perpetrated by the British, similar to that carried out by Churchill and his crown forces during the great Bengal famine.

Whilst true that potato blight (phytophthora infestans) had spread to Europe by 1844, no other “famines” were recorded across the continent in this time period. The starvation in Ireland (and half or more of Scotland) was the direct result of the intentional exportation of 40-70 boatloads of food from the island to “mainland Britain” per day under the watch of 12,000+ British constables, and up to 100,000-200,000 British soldiers of the navy, coast guard, and a handful of other Anglo-imperialist militias.

The death toll of this deliberate attempt to eradicate the Gaels is widely contested even today, but is believed to perhaps exceed 6.2 million in Ireland, with another possible 3-4 million dead in Scotland.

The American Party of Labor stands in solidarity with the Celts and Gaels of Ireland, Scotland, Wales, and elsewhere on this day in commemoration of this great atrocity, one of many carried out throughout history by British imperialists.

The American Party of Labor stands steadfast in solidarity with those still struggling against the occupation of the North’s 6 counties, as well as those still under threat from crown forces in the theocratic free state

To learn more about the works and findings of Forgarty and Ó Sullivan please visit http://www.irishholocaust.org/, and check out Holocausd na nGaedheal’s Facebook page.