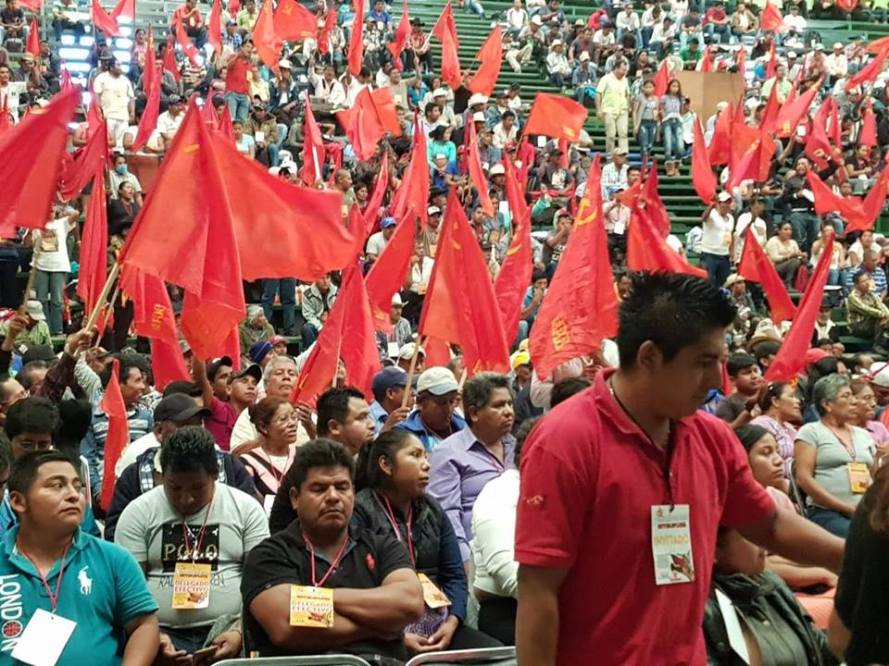 TO THE WORKING CLASS AND TO THE PEOPLES OF MEXICO AND THE WORLD.

In the city of Oaxaca, City of Resistance, the 969 delegates, from the states of Baja California, Sinaloa, Jalisco, Querétaro, Michoacán, Hidalgo, the State of Mexico, Guerrero, Morelos, Mexico City, Veracruz, Chiapas and all regions of the State of Oaxaca; With the accompaniment of more than 20 national organizations, the presence of delegates of the International Conference of Marxist-Leninist Parties and Organizations (CIPOML) from various countries, in a combative and revolutionary atmosphere, our Vth National Ordinary Congress of the FPR was carried out with great success .

Faced with the international reality, we state that the general crisis of capitalism, in its current epoch: imperialism, is the greatest obstacle to the development of human society, likewise, the deepening of inter-imperialist contradictions, the rise of the struggle of the masses of the people, and with it the deepening of the class struggle, is generating conditions for the opening of a new era of proletarian revolutions. The weak growth in many countries, the stagnation of most of them and the crisis in some more, as well as the so-called economic war between the imperialist powers of the United States and China, are creating conditions for a new wave of crisis to be unleashed soon.   A cycle that threatens to be more aggressive and more destructive than the worst crises that humanity has known.

Faced with this scenario, international financial capital seeks to impose a world war of robbery, for a new distribution of the world; the imperialist powers, in alliance with the national bourgeoisies, seek to impose on us the return to power of the most bloodthirsty, most racist, xenophobic ideas; they want to crush the struggle of the working class and the people with the fascist dictatorship, that is why they are bringing to power people like Donald Trump in the USA and Jair Bolsonaro in Brazil. Against this onslaught the Peoples Revolutionary Front calls on the proletariat and the exploited and oppressed popular masses of the entire planet to build a great Anti-Fascist and Anti-imperialist Global Front worldwide.

In our country, the Mexican people, have dealt a  blow to the main traditional parties of the financial oligarchy of our country; On the 1st of July, the PRI, the PAN, the PRD and the government of Enrique Peña Nieto were repudiated by the popular masses; around these parties and governments that have held power for more than 80 years, we demand punishment for all the crimes they have committed against the working class and the Mexican people. With the defeat of the PRI, the PAN and the PRD; he made his way to the installation of the Regeneration Movement (MORENA) in power and to Andrés Manuel López Obrador, who since July 1, in his capacity as an elected government, ratified a cabinet in which he integrated distinguished oligarchs; and maintains proposals to militarize the streets with a national guard,

In the country there will be neoliberal continuity if we do not stop it in time. The fourth transformation is an approach of capital to consolidate its domination in Mexico. For this reason, our declaration is a call to KEEP THE STRUGGLE FOR A TRUE CHANGE, A RADICAL CHANGE THAT IS ONLY POSSIBLE WITH THE INSTALLATION OF SCIENTIFIC SOCIALISM, the only way to guarantee freedom, bread, land, work, education, water, health, safety and happiness to Mexicans.

Comrades, real transformation can only be achieved with the revolution of the proletariat; In our country, to accumulate forces towards that perspective, our Vth Congress Ordinary National Congress, calls on unions and democratic organizations, the working class, the poor peasants, the indigenous peoples, to build with everyone and everyone the great National Assembly of the Proletariat and the peoples of Mexico and continue to maintain mobilization in the streets and continue to prepare the conditions for the outbreak of the General Political Strike.

It is time to ratify that Only Proletarian Revolution is Change!

Long live the Vth National Ordinary Congress of the FPR!

Long live the 40 years of the Communist Party of Mexico (Marxist-Leninist)!

Like Loading...
‹ Statement of the 24th Plenary of the International Conference of Marxist-Leninist Parties and Organizations
Turkey: Three Peace Activist Academics Handed Down Fifteen-Month Deferred Sentences ›