Home › U.S. News › Money, Education, And the Farce Of Justice

Money, Education, And the Farce Of Justice 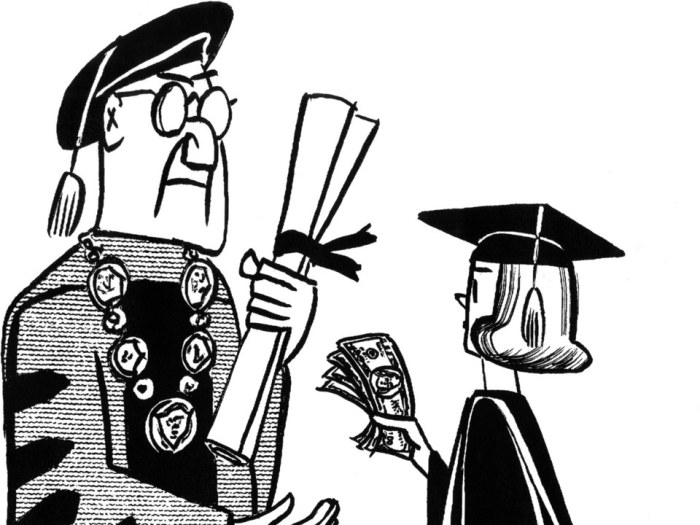 At the beginning of March, headlines of American newspapers were studded by an announced investigation into the bribing of colleges and universities for admission consideration. It was never a secret that having money increases one’s chances of getting into a good school. Even the most ardent supporters of capitalism and socio-economic stratification would acknowledge that money is power. America declares the freedom of opportunity as part of its working system and uses the ever-present rhetoric of the American dream. It is being proclaimed that since all are treated equal, the matter of whether one fails or succeeds to get into a particular college is measured only by merit. The system of the ruling class, the capitalist society we all live under, is being called a “meritocracy”. But! The investigation into the 50 people who used their money to get their children into reputable universities not only exemplifies the impossibility of meritocracy under capitalism, but also the very idea that people are chosen to take part of prestigious institutions is based solely on their work. The nature of this investigation also reveals something else, something that the corporate media outlets won’t talk about. It reveals that the ruling class, whose children are “legacy admissions” and have much greater chances of attending the Ivy League than anyone else, remains untouched.

This investigation which exposes the connection between wealth and education on many a person’s lips is quite simple. Following a report from the District Court of Massachusetts, the Department of Justice launched an investigation into the “college admission fraud”. Their findings stated that just over 50 people were guilty of attempting to bribe those with power in college admissions: deans, sports coaches, admissions officers, and the like. The most noted of the 50 were a few Hollywood actors and actresses. Among the others were capitalists of new money, mostly from Silicon Valley.

Those reading this who went through the application process to get into college may remember the stress and exhaustion involved. The hoops that were to be jumped through just for the application to be considered. Since this false meritocracy is officially touted as the system of admissions, competition has become cutthroat. The unethical, vulgar, and brutal system of competition in the market exists for college admissions sometimes even leading to suicide over the stress. That children today have their childhood ripped from them because they have to have activities going back 15 years to put on their college application to give them a competitive edge.

What is the result of all this hard work? To be a number. To be considered only after those with a large pocketbook have laid their claim to admission. No matter how hard a student has worked their entire lives to make it into the school of their dreams, their hard work only has a chance of paying off after the children of the rich are considered. Many applicants aren’t considered at all simply because “the pile of that demographic of student has been reached”. College admission is a game of money, from private donations and from the state of which the rich control.

Of course, one may raise the question that if the Department of Justice is prosecuting these 50 some individuals, is not justice being served? Is not the fraud of college admissions being dealt with by our dominate social and state system?

Out of the entire ruling class at large, only 50 people have been found possibly guilty for college admission fraud. And this particular group was only caught because so many of them were using one person as a middle-man between themselves and the colleges.

Not only are the rich at large being left alone but the most powerful of the elite, the 0.1%, those families of old money, remain untouched. It is well known that old money families – families whose money, at least in the United States, originated from before the American revolution and throughout the 19th century, still see their wealth grow. Many of these families have been attending the Ivy League for generations, even centuries. It is well known that these institutions put massive preference on legacies, by quite measurable lengths. In 2017 alone, ⅓ of the Harvard freshman class were legacy admissions. One is six times more likely to be admitted to Princeton as a legacy than as of merit. Studies and statements of the Ivy League have shown similar numbers across the board every time the matter is studied. Throwing some new money actors and investors under the bus to present a farce of justice will not significantly impede the rampant corruption and exploitation occurring on the American Neo-Liberal university—to address these long-standing issues, a wider, more comprehensive revolutionizing of American education is required.

It is quite clear that those who can afford special treatment in the world of college admissions will get what they want. Not only are they shown preference but are given it at the expense of the students who have spent their entire lives building up their college admission application only to have their dreams thrown into the dark because a parent with money made a wealthy donation, slipped some money to a coach, or donated a building. There is no meritocracy in the United States education. Like anything else under capitalism, the working class, including working-class students, are told to jump through hoops, sacrifice, and suffer in order to be the better competitor and prove themselves as the best. Education under capitalism is a privilege one pays for, in money and blood.

If American education is meant to benefit the majority of Americans rather than the elite and privileged’s right to education, from the university to the preschool must be practiced under a system which does not propagate and continue a system of elitism and exploitation. For nepotism and bribery to be removed from the college system, the means of which they are obtained must be removed. To usher in a time when education is not a privilege of the elite, where it is not a cutthroat, sometimes life destroying process, it is necessary that the capitalist system be crushed and done away with and replaced by a system which guarantees education as a right and which actively fights privilege, nepotism, and favoritism. Without socialism, education is a commodity you must afford. Without socialism, justice is a farce. The elite want to keep the mass of workers under-educated, in debt, and too busy competing to fight against the system that exploits them. The elitist system of education is just one of their many means of doing so.

Like Loading...
‹ Horrific Accident Claims the Life of a Food Processing Plant Worker. OSHA Investigating for Possible Safety Violations/
Statement of the American Party of Labor on the Attempted US-Backed Coup in Venezuela ›