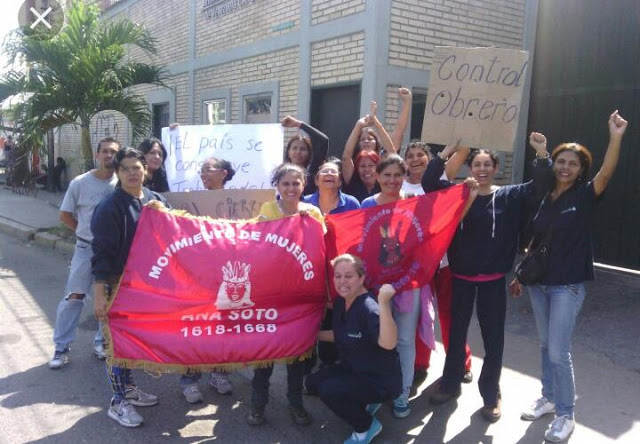 The following is a statement written by the Movimiento de Mujeres Ana Soto of Venezuela. The original can be found here, reproduced by the Unión de la Juventud Revolucionaria de México. Translated by Red Phoenix staff.

In our country there is a bourgeois democratic process with democratic openings, in which instances of popular participation have been built, generating conditions for an elevation to the political level of the broad popular masses and revolutionary organizations. As well as in other sectors, in the trade union area far-reaching struggles have developed for the purposes of taking companies and expropriating and recovering abandoned work infrastructure by employers as a way of accelerating the destruction of the productive apparatus and thus building the conditions for the collapse of the economy. These experiences have enabled us to exercise control of the productive process, in knowledge, in decision making, in  specialization in administrative areas, in the connection between workers of other companies for the establishment of  productive chains, and create favorable spaces to speak about and to form revolutionary workers control, but these experiences are clashing with the existing reality in general (the prevailing bourgeois state).

In these experiences our women’s movement participates and leads alongside the working class, in their struggles for demands that rise to the political level, beyond collective contracts and labor benefits, we have made an important leap forward in solidifying and maintaining the leadership of a company under the control of workers organized through their union. Among those cases, we find the experience of the workers of the transnational company Thomas Greg And Sons of Venezuela, after an accumulation of contract breaches and constant abuses and injustices by the employer against the workers and the fraudulent closure leading to the cessation of productive activity—the comrades, taking as reference other experiences and due to their level of consciousness, decided through the union of workers called SINTRA THOMASGREG, hand in hand with the BOLIVARIAN FEDERATION OF WORKERS OF THE LARA STATE (FBST-LARA) and the ANA SOTO WOMEN’S MOVEMENT, to take control of the company under workers’ control. They proceeded to safeguard the machinery in order to prevent the closure of this work site, and to protect their job security. The union organization within its full right requested the application of article 148 of the Organic Law of Labor and Workers(LOTTT). As a result of this request, the Ministry of People’s Power for the Social Process of Labor intervened and evaluated the application of article 149, ordering the temporary occupation of this company as well as the resumption of productive work of the same. A special administrative board made up of two representatives of the workers and one representative of the employer was installed; this is how labor activities are reactivated under the control of that administrative board.

It is important to emphasize that this company is mostly made up of women workers and directed by a union whose board of directors is made up only of women workers. We emphasize even more that this whole process of intervention by the company to take control took place in the month of March, 2017, the same one that represents a historic milestone for the world proletariat, and the women workers engaged in struggle around the world. From there they have been adapting and modifying the productive process due to a lack of raw materials and inputs and other difficulties, understanding that they initially worked with security paper printing, a raw material that is imported and very complicated to get, they decided to work instead with general level impressions, functioning as a lithographic company.

During the process of administration under the control of the workers, various difficulties have been presented, as we have explained previously, all in a context of the criminal blockade against our country, inflation, and economic sanctions. However, with great efforts and alliances with other trade union organizations, we are currently producing some products, as well as the exchange of raw materials, obtaining machinery for the building of construction lines of notebooks and books, this activity has made it possible to prevent the closure of this company and maintain labor stability under the direction of the working class.

After 25 months of resistance and struggle, 29 women workers continue with production in spite of the difficulties, and it is important to note that production has continued only due to the actions of the organized working class and the revolutionary organizations that accompanied this action, in addition to the political-ideological formation, expressed in the worker-peasant and communal alliance. Organizations such as the Proletarian Formation May 1st School, the Movement of Revolutionary Lawyers for Socialism, the Marxist-Leninist Trade Union Current and our Ana Soto Women’s Movement have played an important role.

In each one of these fundamental struggles and demands the Ana Soto Women’s Movement is present, together with the working class raising the flags, our revolutionary slogans, and our fists against the oppressor and exploiter, building organizational alternatives, demonstrating the power of the organization of the working class and what can be achieved, firmly convinced that the only alternative we have on this road against this system, is the construction of a different society, the society of equity and justice—a socialist society.

FOR WOMEN’S RIGHTS AND EMANCIPATION!

Like Loading...
‹ May 8th Uber/Lyft Strike: A Former Uber Driver on the Costs of the Gig-Economy
Message from the American Party of Labor to the Dominican Communist Workers Party (PCT). ›