Home › U.S. News › Final Declaration of the 23rd International Seminar on the Problems of the Revolution in Latin America

The acute conflicts that register on the international scene, are the expressions of the acute crisis that surrounds the imperialist capitalist system, and reveal the sharpening of the fundamental contradictions of our time, that is, those between capital and labor; between the oppressed people and nations and imperialism; and, among the imperialist powers themselves.

This dynamic explains the development of the economic war between the United States and China, but which also encompasses and aligns the European Union, Russia and other powers on either side, tensing the international stage to the extent of threatening escalation to new and older forms of war and conflict, in the context of the intensification of disputes over areas of influence, market control, raw materials and natural resources among the imperialist powers.

In Latin America, the decline of the so-called “progressive governments” of the early 21st century which, among other things, sought to renegotiate dependence to, without breaking with US imperialism, facilitated a greater penetration of Chinese and Russian imperialisms, and coincided with the rise to power in the United States government of the rightist and fascist Donald Trump, who with the motto of “America First”, sought to consolidate the throne of the world’s first superpower and regain control of its “backyard.”

For his purposes, Trump aims to exalt the reactionary nationalism, placing emigrants, mainly Latin Americans, in the field of his main enemies. To the crusades against undocumented migrants were added to his wall extension project, and the arbitrary detentions of children (separated from their parents) and adults in conditions similar to those used by the fascist regimes of the past. Using pressure, blackmail and coercion, this reactionary anti-immigration policy has achieved the complicit agreement of the governments of Mexico and Central America.  Simultaneously it drives an intense offensive in the region aimed at establishing docile and complicit governments in the region. The establishment of the so-called “Lima Group” in August 2017, to support the conspiracy of reactionary forces in Venezuela, is part of the same.

However, the decline and failure of the so-called “progressive governments”, which is used by the most reactionary forces to associate it with the supposed failure of socialism, is really about the failure of capitalism itself, and the self-proclaimed “21st Century Socialism.”

The discontent of the workers, the youth, the women and, in general, the impoverished masses as a result of the mis-management of these so-called “alternative governments,” totally contrary to their own interests, their inefficiency, the repeated corruption scandals, the intensification of repressive actions and the criminalization of social struggle, etc., are being taken advantage of by imperialism and its henchmen in the right-wing governments of Latin America and the Caribbean to justify the imposition of aggressive neo-liberal and IMF-sponsored adjustment programs; to influence the consciousness of the masses with the most backward ideas, affirming pro-fascist, xenophobic, nationalist and anti-communist proposals — a platform with which the Jair Bolsonaro government came to power in Brazil,

The governments of Bolsonaro in Brazil and Duke in Colombia intensify repressive actions with the criminalization of social struggle, persecution, imprisonment and murder of community leaders and social activists, in their attempt to contain opposition and popular struggle.

Of course, part of this offensive is the war of capital against labor.  The consequent proposals for labor flexibility, aggressive cuts in labor and union rights, and the reactionary reforms to the gains of social security, which seek to intensify the exploitation of the workers to the benefit of the greatest possible capitalist accumulation.

The criminal economic blockade of imperialism against Cuba and Venezuela are also part of this reactionary offensive. 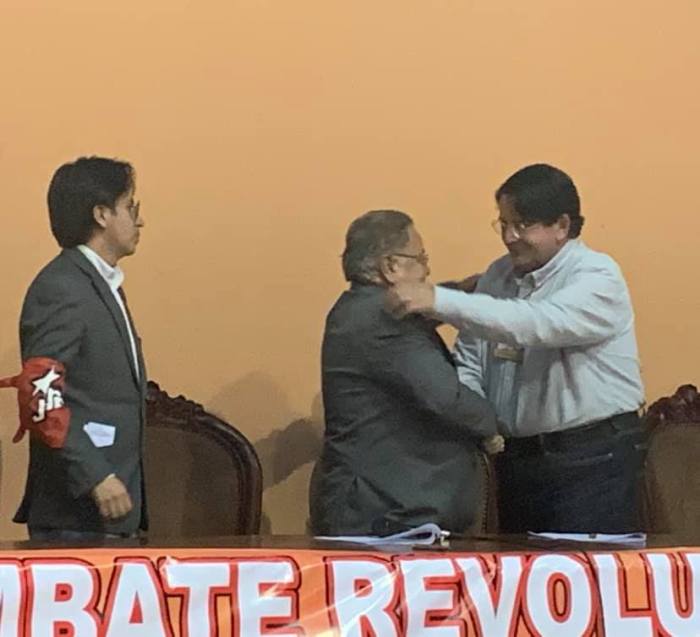 The facts have shown that, in order to achieve the legitimate material and spiritual aspirations of the workers and peoples, the fundamental question is not the way in which the bourgeoisie in power is presented or performs. That the social democratic variants, “progressive” or neoliberal rightists, must be taken into account for tactical definitions for the opposition work with, for resistance and struggle against reactionary or ineffective policies; but not to affirm false hopes that change, social transformation and socialism can come from one or another faction of the bourgeoisie.

The delegates to the XXIII SIPRAL have agreed that the current moment, in combination with the specific reality of each country, corresponds to the communists, revolutionaries and leftists, the class unionists, the leaders and social activists and all democratic people, who face the reactionary offensive of imperialism and the rightist and fascist bourgeois factions.

The seminar salutes the courageous and growing struggles of workers, youth, peasants, native peoples, women, black people against the neoliberal policies and measures of bourgeois governments in the region:  The general strike of May 29 in Argentina, as well as the mobilization of millions of women to conquer the right to abortion, against femicides and all types of gender-based violence, stand out for their magnitude and significance. the numerous resistance and the combative struggles of workers and youth in Brazil against the Bolsonaro government; the actions of students, workers and peasants in Colombia and Nicaragua; the struggles of teachers in Chile, Mexico, Bolivia; and the growing popular struggles in Peru and the Dominican Republic, Honduras, Haiti.

With enthusiasm and revolutionary fervor, SIPRAL acclaims the overwhelming victory of the brother people of Puerto Rico who, after two weeks of continuous fighting, forced Ricky Rosselló, representative of the usurping colonial power of US imperialism, to resign as governor. This victory is a brilliant page in the history of its tireless struggle to defeat colonialism and conquer its independence; a struggle that incorporated large sectors of its brave people, highlighting the participation of patriotic intellectuals and international leaders of culture, confirming the importance of this front in the emancipatory cause.

The delegates to the XXIII SIPRAL, have agreed that the assimilation of the valuable experiences of resistance and combat to bourgeois governments and imperialism lead us to new challenges, to consolidate our revolutionary convictions, to specify our objectives and programs, to expand the activity of education, and to aid the masses in facing new battles with greater advantages.

For that, it is essential to strengthen revolutionary and left-wing parties and organizations, consolidate trade union organizations and class currents on all social fronts, in order that they become true referential nuclei for the whole of the working class and the other working classes.

The seminar also insisted on the need to promote and lead processes of broad unity of action with all sectors of rural workers and segments of small producers, who are also affected by the neoliberal policies of the industrial, commercial and agrarian bourgeoisie, and imperialism, because the working class and its politics dispute, conquer and sustain hegemony in these processes.

Following this perspective, proposals for the urgent need to work for a policy of broad democratic, anti-fascist and anti-imperialist fronts in the region were registered.

The revolutionary need to resort to all forms of struggle in combat against the common enemies of workers and the peoples was also raised; as well as multiplying the banners that, gathering the most relevant and immediate demands of the masses, advance the strategic political objectives of social emancipation.

We reiterate our supportive embrace of the brave people of Puerto Rico, who, after their victory, will walk to new battles until they gain their final independence. In the same way, we ratify our total solidarity with the persistent struggle of the people of Haiti, which challenges and confronts the corrupt puppet governments of imperialism, striving for a real change.

Committed to the revolutionary struggle against right-wing and fascism, we ratify that the only true way out of the crisis that surrounds the capitalist world and that unloads savagely on the backs of workers and the peoples, is in real change, in the social revolution, the conquest of political power and the construction of socialism.

Our commitment is manifest in every struggle that confronts and challenges the imperialist capitalist system.

Union of Rebel Youth of Brazil

Movement of Struggle of the Neighborhoods, Villages and Favelas MLB – Brazil

General Union of Workers of Ecuador

Federation of University Students of Ecuador

Federation of Secondary Students of Ecuador

Vanguard of the Technical University of Cotopaxi – Ecuador

Like Loading...
‹ Comuna Antilla’s Response to the Discourses of the Imperialist Right in the Face of the National Situation in Puerto Rico
ICMLPO: Reject Imperialist Interventionism in Iran, Solidarity with its Workers and People ›