Latest Attack On Transgender Workers Is An Attack On All 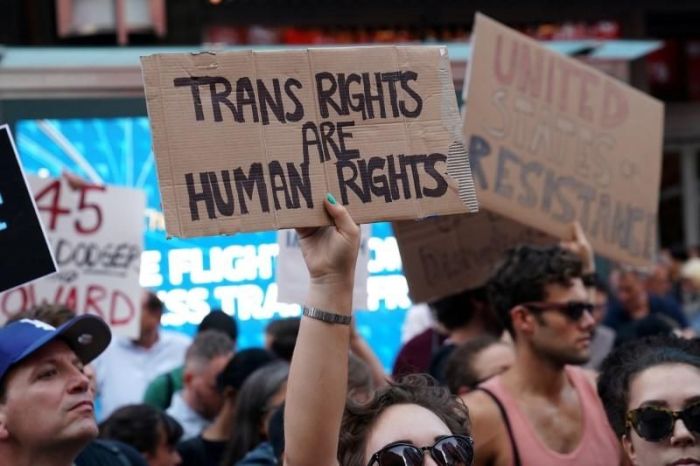 It is no secret that the Trump Administration is one of a great reaction that preys on the most vulnerable of our society. The marginalization of people leading to the furthering division of the working class, the majority of the American population, has become the Trump Government’s bread and butter. This week, the Administration continued its pattern of attack on minority populations in the working class, this time targeting transgender workers specifically in a case which could overturn legislation preventing all gender discrimination in the workplace.

R.G. & G.R. Harris Funeral Homes Inc. fired an employee, Aimee Stephens, for transitioning. Stephens former employer gave only this as justification for her firing: “…believe that the Bible teaches that a person’s sex is an immutable God-given gift.” Since then, Stephens has taken the case to the Equal Employment Opportunity Commission (EEOC) who have disputed the firing citing Title VII which prohibits employers from discriminating on the basis of sex and sex stereotyping.

The Trump Administration and the Department of Justice (DOJ) have said that Title VII does not extend to gender identification. Stephens and the EEOC brought the case to an appeals court which has ruled in favor of Ms.Stephens. The Supreme Court has now been asked by the Administration to review this case.

If in fact the Supreme Court rules in favor of the employer, the Trans community at large will be under direct attack by business owners, from whom there is already great discrimination, who will be protected by law. This will not only affect trans workers but the LGBTQ+ community at large and even cis-gendered workers who do not fit their gender stereotype. Simply being too masculine or feminine for your sex, by your employer’s judgment, would be grounds for firing. This case greatly illustrates that an attack on one is an attack on all.

This case greatly exemplifies the need for worker solidarity. By deepening divisions in the working class, the most marginalized and vulnerable groups not only become attacked themselves by reactionaries, but become the doormat for which the working class as a whole may be attacked, stripped of their jobs, their livelihood, for merely existing naturally.

It is true that many who claim to Marxists, communists, leftists, etc. are and have expressed quite explicitly transphobic and trans-exclusionary politics. This is wholly incorrect for any student of Marx to take in our modern era. It is true that, in the past, socialist states took an incorrect stance when it came to the LGBTQ+ community. But as Marxists, we must think scientifically and not uphold the mistakes of our forebears for the sake of “tradition” or to repeat the prejudices of the past.

The fact for any Marxist should be simple: there is no rational/scientific reason for the discrimination against trans-people or the LGBTQ+ community at large. Such people are just as natural as a cis person is. Before class society, many cultures around the globe recognized multiple genders or did not even classify people into genders as we know them today. With the advent of class society, these various notions of gender were gradually done away with. The need for men and women to give birth to a child who can inherit the private property, and in turn give birth their own child to inherit the property, became paramount. Thus, the natural sexual orientation of the human race was put into chains to serve the needs of private property. Of course, it was the class of people who were ruled that were and are most subjected to this oppression. The ruling class which uses its power to cultivate these values amongst the past and current working class also have the power of sexual privilege. Members of the ruling class are constantly being caught having sexual relationships of the same kind they publicly oppose, while many also engage in degenerate sexual acts such as pedophilia and sex trafficking.  Sexuality became a class privilege.

This division has kept the working class divided and fighting itself for thousands of years. The latest attacks on the trans community serve the current Administration in two direct ways, the first is to continue to carry out the reactionary attacks on minorities, continuing to cultivate a society of reaction. The other is to have the working class fighting itself rather than the ruling class and its officials in the state. Just as the ruling class pits workers against one another over race, sex, nationality, etc. they do so in sexuality as well.

And these divisions, which the ruling classes have been cultivating for over 5,000 years keep us, the members of the working class at each other’s throats or simply not caring. But this case exemplifies needs working-class solidarity. It is easy for the apathetic and selfish to simply say, “Well, I’m not trans, so why should I care?”. But this case exemplifies the old saying “if you think the problems of one people is not your problem, then do nothing and the problem will soon be yours.” This case particular has already shown that the attack on trans workers is being extended to other workers well. If the Supreme Court sides with the Administration, sex discrimination in the workplace will run even more unchecked than it already is, and even more so, it will be completely legal.

An attack on one is an attack on all. As workers, we must move past the reactionaries values that are cultivated and shoved down our throats by the ruling class. We must stand together with those groups in the working class who are easy targets for the forces of reaction. We must not give in to old thinking, thinking based on irrational ideas, metaphysical concepts, and dogmatic commands. We must negate the negations of class society.

Trans rights are workers rights, they are human rights, and they must be upheld by those who want to push society, humanity, forward.

The working class cannot lose its chains by oppressing its own and siding with the ruling class. If we do not stand together in solidarity, if we do not protect each other from the attacks of reaction, then the working class will continue to be in disarray, fighting itself rather than its oppressors.

Like Loading...
‹ Revolutionary Communist Party of Bolivia: The Bolivian Peoples are Standing Up in the Fight Against Populism, Authoritarianism, and Repression
US Financed Dictatorships in South America Killed Thousands ›