Home › U.S. News › Who are the Sanders Supporters? An Afternoon at a Sanders Organizing Meeting

Who are the Sanders Supporters? An Afternoon at a Sanders Organizing Meeting 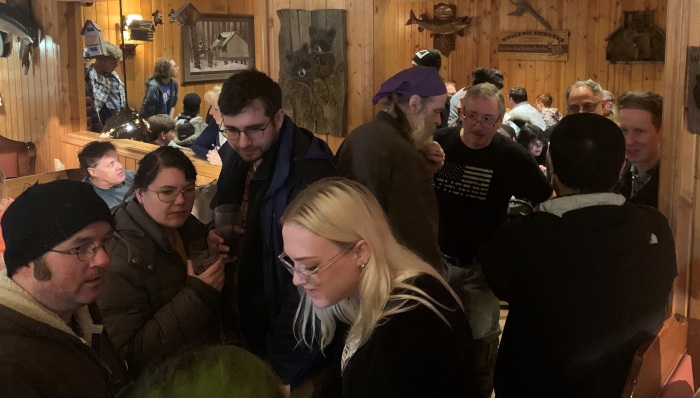 Nearly 60 people quickly spilled out of the planned meeting space, a 15 chair side room at Bill’s Pizza and Pub, Grayslake, IL

On Saturday, February 15th, nearly 60 supporters of the Bernie Sanders campaign, notified by little more the BERN campaign app and facebook events, crowded into Bill’s Pizza and Pub in Grayslake, IL, a northern suburb of Chicago. The Red Phoenix was in attendance to interview attendees and record their stories, and hear how their work, school, and general life experiences had pushed them towards the Bernie Sanders campaign and political involvement.

As we walked in about fifteen minutes before the meeting was to start, people were already spilling out of the small side room reserved for the meeting. A large, fake polar bear fur was ironically hanging on the wall outside the gathering, populated by many who stated that their chief reason for supporting Sanders was his stance on the environment. One such person, Christine, 72, of Grayslake, told us that “I have never participated in any campaign in my life,” but that “Bernie’s putting of the environment first means everything to me.” For Christine, the environment overshadowed all other issues, and gave her the most pause, particularly regarding, as she said, “the world we leave behind for the generations to come.”

For many in attendance, it was not just the erosion of environmental protections that stirred them to action. Janet, 63, of Crystal Lake, IL, told us that she decided to be active in the Sanders campaign, despite a recent knee-replacement surgery, because “for my whole life, I have seen FDR’s welfare programs dismantled and attacked, and Bernie Sanders is the only real candidate to return to those measures.” These measures, Jan explained, “brought real prosperity to my family,” living on a farm in unincorporated territory south of Chicago. LBJ’s “great society,” building on FDR’s precedent, was the only way Jan could afford to go to college as a first-generation college student, where she would major in Audiology and become a practicing school and later private audiologist. “If it wasn’t for my knee, I’d be running in the streets with you,” she concluded with a smile, “but here I am.”

As we made our way outside to the main room to the slowly growing number of people standing outside, struggling to hear the presentation inside (the campaign had not brought a microphone or speaker system, as they didn’t expect this large of a crowd), we met Hector Rosa, a staff specialist with the Illinois Nurses Association, the largest union representing nurses in the state. Hector told us that he recently had come back from a unionization effort at a Treehouse Foods factory in South Beloit, Illinois. Hector had gone, as he said, “undercover” in order to push a unionization vote at the factory for the Bakery, Confectionery, Tobacco Workers and Grain Millers’ International Union. “When they found out about it,” he continued, “they threatened to deport all of the immigrant workers in the factory, the majority of the workers in a place like South Beloit.” The threat killed the unionization movement. This experience, and his current work with the INA, was why he was in attendance at the event. “We need a labor movement,” he told us, “and Bernie Sanders is the best candidate to get us there.”

The necessity of a movement outside Bernie himself was a common theme among those we talked to at the event. A social security worker from Chicago, IL, 24, who prefered to stay anonymous due to the nature and precarity of his work, told us that “after 2016, I was so depressed, I didn’t get involved politically at my university, and I didn’t really have any hope, but I’ve really admired Bernie’s resurgence in 2020.” But it wasn’t just about Bernie for this government worker: “But, in those years between, I think, we definitely need a movement, not just Bernie.” In his work in the social security office, he said he had seen “the systemic issues that  can’t be fixed in four years or with a vote.” His union, he continued further, “has no fangs, because we can’t obviously strike.” This coming together of immediate working circumstances, and straddled with debt from the University of Illinois (which costs, in-state, over $40,000 a year), pushed him towards the campaign, he told us. At the end of our interview, he happily took an “eat the rich” button offered by one of our reporters, picking it instead of a Bernie 2020 button.

As the event concluded, conversations endured and handouts were circulated in both Spanish and English on organizational meetings happening in areas across Northern Illinois. The diversity in age, ethnicity, gender, race, and politics in a county that is 75% white, in the top 10% of wealth in the state, and in which Clinton took the 2016 primary, was surprising and noticeable. Many of the young people we talked to had never been involved in traditional or left political spaces, but were moved by their own working experiences to join the Sanders campaign. As the 2020 election plays out, the DNC struggles against social democracy, and the US political order continues to settle into paralysis and stagnation, the diverse working class, quickly learning from experience in school and on the job, will wield an increasingly formidable power.