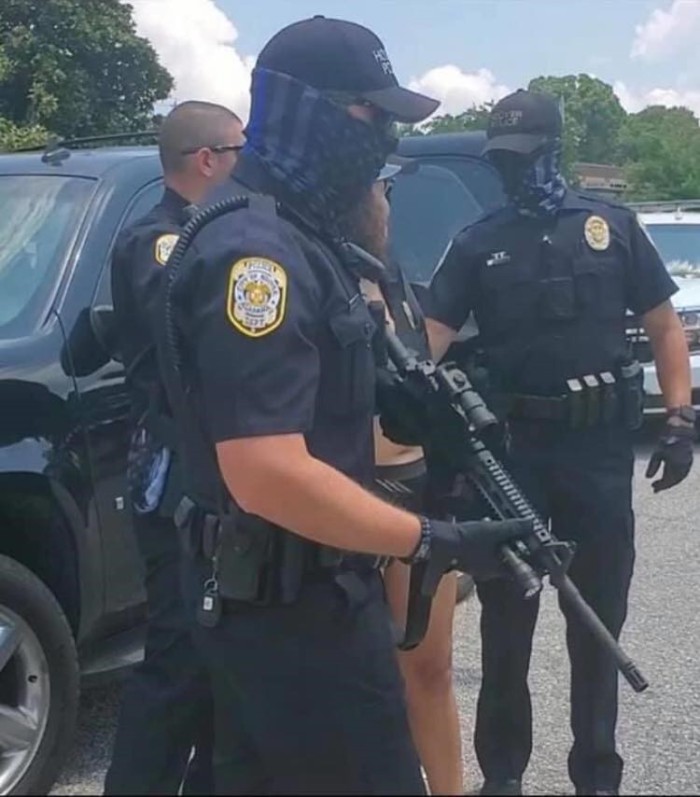 As George Floyd’s murder at the hands of the police is igniting uprisings across America, and creating international solidarity and demonstrations in opposition to police violence abroad, protests against the Hoover Police Department over the murder of Emantic Fitzgerald Bradford Jr. have hit a new fever pitch. In 2018, Bradford was slain by police on the night of Thanksgiving, at the Riverchase Galleria Mall in Hoover, Alabama. Police responded to a shooting at the mall where two individuals had been shot. Another African American man suspected in the first shooting was arrested in Georgia a week later and charged in the shooting of those injured. Bradford was holding a legally owned weapon when shot and was not involved in the prior shooting incident, although he was near the crime scene. The shooting of Bradford was immediately controversial, and was condemned by the Alabama National Association for the Advancement of Colored People (NAACP) as an example of racially biased policing. The officers were placed on administrative leave.

Protests began the following day, but have come back with a new explosion of daily organized solidarity among Black Lives Matter and allies as a united front against police brutality against the community. Chants of “Hoover killed E.J.” were thunderous throughout the crowd of hundreds, as I stood in front of a Black Lives Matter demonstration at the Birmingham Police Department steps on the day of May 31, 2020. Clashes with the police against peaceful protesters have only intensified across the state since that time.

We spoke to two people who were at the Hoover protests for their insights into the upsurge in protest movements in areas like Alabama: the first, Bre, a 28 year old Hoover local involved in activist work throughout, the second, Deanna, a 28 year old mother of two.
_________________

Phoenix: Why were you protesting that day?

Bre: Generally speaking, I was protesting the systemic racism throughout the country within police departments. Specifically, the systemic racism and cover-ups happening inside Hoover PD on a daily basis. They are covering up for EJ Bradford’s murderer and refuse to cooperate with the public. As our protests went on, my focus grew to include addressing Hoover PD’s blatant disregard for constitutional rights of protesters. Watching the mistreatment and intimidation of protesters on the daily grew my disdain for the department and city as a whole. The mayor and police chief refuse to acknowledge any wrongdoing.

Phoenix: What would you want our national readers to know about the events in Hoover?

Bre: Hoover PD and the city of Hoover are trying their hardest to silence activists and leaders in the Black Lives Matter movement and within the Justice for EJ Bradford movement. They are using unnecessary and excessive force and intimidation tactics to try to instill fear in anyone who disagrees or dares to call them out. The city refuses to take questions about these events at City Hall meetings with open agendas. They are issuing bogus warrants against leaders and    protesters in their push for silence. Regardless of these tactics, we have become more motivated, more organized, and more fired up. We will not be silenced until we get all charges against protesters dropped and the EJ Bradford video released.

Phoenix: Why were you protesting that day?

Deanna: I was protesting because I have seen firsthand how POC are treated differently by those in positions of power many times in my life and it has to stop. Also because I believe our police force has overstepped their bounds and Nobody that they are meant to protect (which is supposed to be Every American, not just rich or white ones) should Fear them, yet so many average Americans do. And I believe that more funding should be put into public service programs that could help prevent crime than to be wasted arming the police as if they’re going to war. I also feel that the prison system is modern day slavery and inhumane. The police are meant to Help the American people, not Control or Kill them. I was in Hoover that day specifically, because I had witnessed them throw one of my friends and one of the organizers to the ground and rip her shirt off of her when they had arrested her at a previous protest, and I was determined to use my privileged presence to protect her and any others from having that happen again.

Phoenix: How were you feeling at time of arrest?

Deanna: The police began telling our group we had to leave or be in violation of curfew. We repeatedly responded “Take a knee, and we’ll leave.” One officer did, and then they sent him home.  After that happened one woman went and sat down in the grass by herself, I joined her and so did a few others. They then had a SWAT team arrive, but we all refused to move. I had never been arrested before, and I had seen them hurt others in the previous arrests at Hoover so I was shaking to be quite honest, but as I said before,      determined to protect the others who stayed and the organizers who had stressed that they believed the more allies that stayed the safer we would all be, and I feel they were right. The arrests were fairly peaceful. The officer who arrested me even changed my cuffs trying to make me more comfortable. I kept waiting for them to read me my rights, but it never happened. They loaded all of us into a bus and took us to the jail where we were searched and then had body scans done. I am breastfeeding and they did allow me to use their private bathroom in order to express some milk, but had no sterile containers of any sort to collect the milk in and I had to pour it down the drain. When I was done they put me with everyone else. There were 11 of us put into one holding cell. (No social distancing.) There was one other woman in there who had not been on the bus with us, but it turned out she had been at the protest, when they told us all to leave the protest site they assured us that as long as we were in our vehicles by curfew we would be left alone. They lied and she was dragged her from her car where she was staying        to watch what happened as her sister had stayed on the ground with us. While we were being held they told us three different times they would bring us water, but never did. -The Hoover police force has been out in massive numbers to wait for any of our group to make a misstep so they can arrest them instead of, you know, doing their jobs and preventing Crimes. Since that day I have seen them arrest people for having one foot in the street while simultaneously allowing people to walk through the street to them to bring them lunch and things and right after arresting 6 of ours for “being    in the road” a man walked by with his dog In the same street   and was not bothered.

Phoenix: What would you want our national readers to know about the events in Hoover?

Deanna: On the fourth of July there were counter-protesters across the highway and while they arrested people from our group including the two head organizers, who they arrested upon arrival with false warrants, when we pointed out the other side and that some of them were now stepping into the street they told us, “they’re not protesting.” Several of the officers have now begun wearing Blue Lives Matter masks to the protests. Also, on the 4th, one woman began seizing when they went to cuff her, the arresting officer immediately put his hand on his gun, then they pushed her to the ground on her back while she was having a seizure and she suffered burns from the pavement all over her body. This past Friday, a man drove his truck into a protester who then hit the hood of his truck with a flag. The police arrested the protester and allowed the man who just tried to run people over to leave. I found that particularly telling as they have been insisting their presence at our protestant is out of concern for our safety and not a desire to silence us.
_______________________

The resolve of the Hoover protestors, Black Lives matter, and Justice For EJ movement endures despite daily arrests and intimidation from an increasingly hostile police force. The protests show no sign of letting up until justice for Emantic Fitzgerald Bradford Jr. and true change in racist policing comes to the state of Alabama and the rest of the country. Alabama has been a pivotal State in the fight for civil rights, and the people are continuing the movement that has been built off of the revolutionaries that came before them. To follow our coverage of the Hoover, Huntsville, and other protests across Alabama, follow The Red Phoenix on Twitter, Instagram, and Facebook.

Like Loading...
‹ “A Lot of People Are Going to Die, and It’s Because of Capitalism:” First Hand Accounts from Florida
Chicago Teachers Fight Back, and Win, Against Reckless Reopening ›