Home › International › Austerity, Imperialism at the Heart of Beirut Disaster

Austerity, Imperialism at the Heart of Beirut Disaster 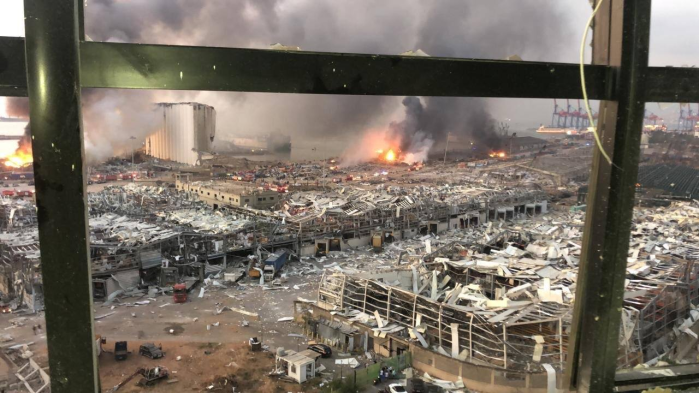 Ground zero of the Beirut explosion, with the explosive silo pictured left.

On Tuesday, August 4th, a massive explosion comparable in its explosive power to a low yield nuclear gravity bomb, erupted in the Port of Beirut, Lebanon, killing at least 137 people and wounding more than 5,000. The explosion is sourced from a cargo ship fire in the city’s port igniting a nearby silo full of the industrial fertilizer and explosive precursor ammonium nitrate. Government officials had been aware of the precarious placement of the incendiary cargo for several years but did not act to secure it or to transport it away from the bustling port. Donald Trump has weighed in on the explosion after “observing initial intelligence reports” (a video on the internet, like the rest of us) as saying “It looks like a bomb.” Global sympathy has been given to the people of Lebanon at a time when many are desperate not for sympathy alone, but for truth and justice.

This tragedy comes at a time of acute crisis for Lebanon, on top of the global health and economic crisis emanating from capitalism’s haphazard response to COVID-19, Lebanon is one of the most import-dependent countries in the world. As of 2018, Lebanon imported $21 billion worth of commercial goods and exported only $3.6 billion, resulting in a trade deficit of $17.4 billion. Lebanon’s trade is structurally negative with a business culture extremely receptive to free trade and a laissez-faire approach to government regulation of the economy. The effects of Lebanon’s 15 year-long civil war left a structural impact on Lebanon’s productive capacity as does continued aggression from its imperialist neighbor Israel, most notably in 1995 and 2016 during Operation Grapes of Wrath and the 2016 July War.

The explosion occurred when the long-awaited verdict of the trial on the assassination of former President Rafiq Hariri was impending. Hezbollah had been accused of assassinating Hariri to promote a pro-Syrian government while Hezbollah challenges this assertion by accusing Israel of the assassination as a pretext for demanding Syria’s withdrawal from Lebanon and for increased annexations on Lebanon’s southern frontier. The burgeoning crisis in Beirut has already been seized upon by Israel, who has promised to bring “humanitarian aid” to a country it has repeatedly destroyed, a classic imperialist dog whistle. The explosion comes but a week after border skirmishes between the IDF and Hezbollah, wherein Israel accused Hezbollah of provocative activity and Hezbollah asserting that Israel fabricated the threat to justify renewed operations into Lebanon.

As the value of the damage ranges between 3 to 5 billion dollars, a warehouse storing essential medical supplies for the COVID-19 crisis has been destroyed, and up to 300,000 people have been made homeless by the blast, 50% of the population of Lebanon living under the poverty line with an unemployment rate of nearly 40% and a refugee crisis from wars in Syria and Palestine, Lebanon is today, a wounded nation. Suffering and exploitation has been compounded severely and the masses of the toilers of Lebanon and of the world demand answers and justice for this outrageous incident that appears to be the result of the gross mismanagement of waste endemic to the bureaucracy and corruption of the capitalist system. Much like the Grenfell tower fire in the UK, and the deadly surge of COVID-19 in the USA, austerity and capitalist profit-seeking continues to trade human lives for corporate profit, and it is the working class who pays the most. The Lebanese Communist party has released its condolences to the victims of the explosion and calls for an immediate investigation into the cause of the explosion, a demand echoed the world over.

Invest and protect the people, not corporations!

Like Loading...
‹ Chicago Teachers Fight Back, and Win, Against Reckless Reopening
In Remembering Baseball’s Racist Past and Present, Today’s Players Continue the Fight for a Radical Future ›