On January 11, days after a search warrant was carried out against the former president Donald Trump, an armed gunman by the name of Rick Shiffer, 42, armed with a rifle, attempted to break into the FBI visitor center in Cincinnati, Ohio.

Shiffer was previously known to the FBI, having been sought for questioning for several months due to his presence in DC the night of January 5th 2020 and his ties to several fascist groups. The FBI also attempted to interview Schiffer for this, but was unsuccessful.

On the day that Trump’s Florida Resort was raided by the FBI, Shiffer posted the following to his social media: 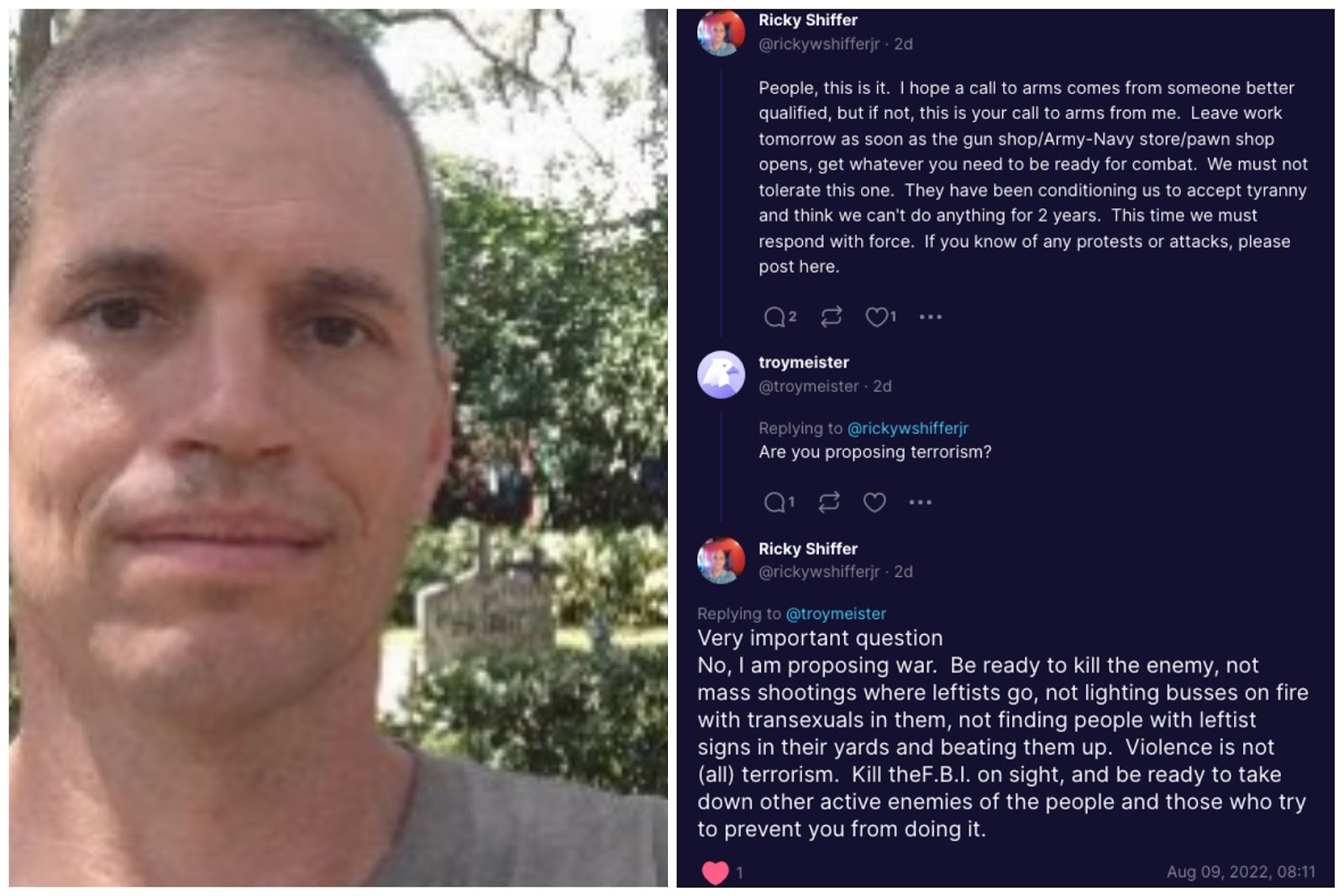 Shiffer, believing that leftists and trans people are his enemies, stated that they must attack and kill people, including law enforcement agencies that might stand in the way. Shiffer posted this statement on the platform Truth Social, which is Trump’s twitter clone. The FBI also stated that it had received information but it “did not contain a specific and credible threat.” Law enforcement told CNN that the image on the account matched an ID of Shiffer. Shiffer also posted that they believed the election was stolen.

Believing an old rumor that nail guns were somehow more effective at breaking glass than a gun, Shiffer attempted to break into the FBI offices in Cincinnati Ohio by nailing his way through the bulletproof windows of the screening center.

Following his failure to force entry into the offices, Shiffer fled the site by car and shortly later entered a several hours long armed standoff with authorities; apparently continuing to post on his account on Truth Social, during the standoff, before finally being shot dead in the mid afternoon.

The American Party of Labor, with its publication The Red Phoenix, has been sounding the alarm of Trump’s Fascism for years. Beginning in March of 2016, before the presidency, in the article Donald Trump and the Rise of American Neo-Fascism, we called to the attention of many that Trump’s fascist rhetoric spouted “making America great again”, with chauvinist attitudes towards women, towards immigrants, and towards muslims. In this work, we defined fascism the open terrorist dictatorship of the most reactionary, most chauvinist and most imperialist elements of a ruling class exercised through a fascist political party or organization having a mass base. We finally called to action that this brand of fascism must be defeated through militant, organized mass action.

In October of 2020, in the article of Elections Won’t Defeat Fascism, Only We Can, we commented how after our article many people on the left accused us of reformism, of not attacking Hillary Clinton more, yet we proved to be correct in the end. We also expanded upon the uniqueness of American Fascism:

“Fascism is nothing new in American political life.  From the second generation Ku Klux Klan of the 1920s to Father Coughlin, the German-American Bund, and the Silver Shirts of the 1930s, to the American Nazi Party of the ‘60s and ‘70s to the Alt-Right of today, overtly fascist organizations and ideas have had a persistent presence on the American political scene.  What is new is how these groups and the ultra-reactionary ideology they represent have moved from the fringes and shadows to the center stage.  It is evident that they have been encouraged and emboldened by the Trump presidency.”

We finally also commented again that “Everywhere reaction and hatred is, we must be there to counter it with working class organization, journalism, and mutual aid.”

In March of this year, the Amos Archer Division of the American Party of Labor denounced Andrew Walls and the Proud Boys for attacking an Akron Woman in the streets. In the article Ohio APL: Racist Proud Boy Attack on Akron Woman Demands Action, we stated that the rise of right wing extremism leads to more violence in the streets, that all chauvinism (whether it be racism, sexism, homophobia, transphobia) is completely opposed to a civil society as it leads to the division of the workers, and listed several other attacks committed by the Proud Boys.

In light of these attacks, in light of this chauvinism, two things are clear:
1: There is a definite rise of fascism in America, and terror is also rising significantly.

2: The only answer is building a mass movement of workers to combat the increasing threat.

The time is now to make local connections, get active in the community, talk to fellow workers, create mutual aid organizations, and make friendships. It is through this organization work that we build a network strong enough to challenge and oppose the rising fascist threat in our streets. We cannot wait, and cannot put these efforts off.